Note: This page is for 1990s and 2000s infielder Jose Hernandez; for other players with the same name, click here. 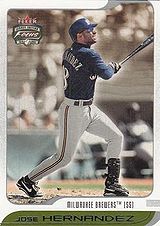 José Hernández is an infielder who spent 15 seasons in the majors and played for ten major league teams. He is the cousin of Luis Figueroa and the son-in-law of Orlando Gomez. He hit 168 homers in the majors, was MVP of the Puerto Rican Winter League once and made one All-Star team in the major leagues.

In 1989, José remained unimpressive as a backup infielder for the Gastonia Rangers with Colon and Jeff Frye manning the starting spots on the middle infield and a younger country-mate, Iván Rodríguez impressing the loop. Hernández hit .219/~.323/.321 and whiffed in 67 of 215 AB. His OBP had improved significantly, though, and he did leg out six triples.

Texas waived Hernández the next year but he was claimed by the Cleveland Indians. He spent most of the year back in AA, hitting .255/~.317/.337 with 108 strikeouts for the Canton-Akron Indians. His 40 errors were the most by any Eastern League shortstop. He got a September call-up to Cleveland and played three games for the 1992 Indians. He hit a weak .227 with three doubles and no triples or homers for the [[Leones de Ponce|Ponce Lions in the 1992-1993 Puerto Rican Winter League season.

Hernández seemed stuck when he began his third year in a row in AA, batting .200/~.250/.280 only in 45 games for Canton-Akron. He got a new chance, though, when the Chicago Cubs picked him up on June 1 for Heathcliff Slocumb; Rouglas Odor replaced him at short for Canton-Akron.

With Chicago, José hit .304/~.353/.418 for the Orlando Cubs and was 6-for-24 with the Iowa Cubs. Surprisingly, his minor league career was over for all intents and purposes despite having barely appeared in AAA.

In Puerto Rico in 1997-1998, José lifted his home run total from three to 20 to break Orlando Cepeda's league record by a native Puerto Rican, tying Reggie Jackson for second-best all-time to that point. The Mayaguez Indians star also led the league in runs (54) and steals (11, tied with Jose Valentin. He won the league MVP award. Baseball America named him to their Winter League All-Star team at shortstop. He joined the Santurce Crabbers for the 1998 Caribbean Series and hit .333/?/.778 with six runs, eight RBI and four home runs. He led the Series in home runs and RBI and the club finished second; an error he made in game four helped cost the team a chance at the title. He was named to the All-Tournament Team at short. He then won the Baseball America Winter League Player of the Year award.

Hernández saw his most playing time yet in 1998, shuffling between short, third, center field and left field primarily. He batted .254/.311/.471 with 23 home runs, third on the club. His seven triples tied him for 8th in the 1998 NL. José struggled mightily with the curve, and it led to high strikeout totals.

José batted .253/.302/.373 for the Braves in 1999, as their main shortstop after the trade. He went 4-for-18 in the playoffs, making his only World Series appearance as Atlanta fell to the New York Yankees in the 1999 Fall Classic. That year, he struck out 145 times, third in the NL behind Sammy Sosa and Preston Wilson.

A free agent, Hernández signed a three-year, $10-million deal with the Milwaukee Brewers. He hit .244/.315/.372 as the main third baseman for the Brewers in 2000 and also saw significant time at short. He made his only minor league appearance between 1994 and 2004, going 3-for-9 with 2 home runs for the Indianapolis Indians.

In 2001, José was the regular shortstop and he smacked a career-high 25 home runs and 78 RBI, but his overall batting line was only .249/.300/.443, good for a shortstop but otherwise relatively unimpressive. He fanned 185 times, falling four short of the 31-year-old MLB record held by Bobby Bonds, and leading the 2001 NL.

Hernández had a huge year in 2002, posting a 121 OPS+, the best he had in any season as a starter. He made the NL team for the 2002 All-Star Game and Baseball America named him the Brewers' Major League Player of the Year and stated that he had the best offensive numbers of any shortstop in the 2002 NL - .288/.356/.478 with 24 HR, 72 runs and 73 RBI. In the midst of his best year, though, José became the subject of controversy when Jerry Royster benched him for eight of the final 11 games after he was one strikeout away from Bonds' record. Royster said that he didn't want a strikeout record to overshadow the fine year Hernández had at the plate. José became the subject of much media attention, though, because of this, perhaps more than he would have gotten had he broken the record (which shortly thereafter was broken by Adam Dunn). Because he was relatively little known, casual observers thought he was a terrible player given all they knew about him was about the strikeouts. Few people - including Royster - seemed to understand that in spite of these, he was a very good player and that the Brewers were better with him in the line-up than with any alternative.

The Colorado Rockies signed José prior for the 2003 season and he hit only .237/.308/.362 despite getting to play regularly at Coors Field. On June 20, Colorado dealt him to his old Chicago club for Mark Bellhorn. He hit just .188/.222/.348 with the 2003 Cubs and got dealt again barely a month later to the Pittsburgh Pirates along with Matt Bruback and a player to be named later (who would be Bobby Hill) to the Pittsburgh Pirates for Aramis Ramirez, Kenny Lofton and cash. The move, which was pushed by Pirates ownership due to Ramirez's salary, has gone down in infamy as one of the worst deals in Pirates history. By 2006, all three of the players acquired would be gone from Pittsburgh while Ramirez was starring in Chicago. Hernández hit .223/.282/.326 for the 2003 Pirates after replacing Ramirez at third base and his season line was a miserable .225/.287/.347 with only 13 HR and 177 strikeouts, five behind 2003 NL leader Jim Thome. His OPS+ had fallen in one year from 121 (his best year as a regular) to 61 (his worst) in an amazing turn of fortune. It would be his last year as a starter. Additionally, he would rarely play shortstop again.

Jim Tracy had been the 2004 Dodgers manager and was a strong advocate of José, so brought him in for the 2006 Pirates even though Pittsburgh fans associated him with the Ramirez trade debacle. It did not help matters that Hernández, like fellow "proven veterans" Joe Randa and Jeromy Burnitz, struggled. He hit .174/.240/.304 in March/April and .185/.214/.185 in May. As less was expected from the backup than the highly-paid free agents, he got less criticism; he also got less attention when he improved significantly after that and became one of Pittsburgh's most productive hitters in the middle of the year. Overall, he hit a pretty respectable (for a backup infielder) .267/.328/.350 for the Bucs. He was sold to the Philadelphia Phillies in late August and batted .250/.273/.406 in 32 AB and 18 games for them.

Hernández signed a minor-league deal with the Pirates for 2007, worth $900,000 if he made the 25-man roster. He was considered the early favorite to be Pittsburgh's utility infielder for 2007 but Don Kelly gave him a tough challenge in spring training and there were questions about José's ability to play the middle infield at his age. He failed to make the team, ending his career as a major leaguer.

Hernandez was a coach for the GCL Orioles in 2010, the Delmarva Shorebirds in 2011, the Frederick Keys in 2012, and Norfolk Tides in 2013-2018. In 2019 he joined the major league Orioles as a coach, without any specific responsibilities appended to the title. In 2020, he was named the Orioles' assistant hitting coach.