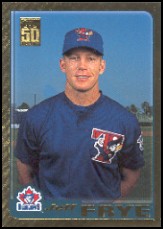 Jeff Frye was signed by the Texas Rangers and scouts Jim Dreyer and Doug Gassaway as a 30th round pick in the 1988 amateur draft.

Frye hit for the cycle on August 17, 2001, becoming the second Toronto Blue Jays player to do so. The other, Kelly Gruber, who had hit his in 1989, was at the game. With only the single remaining and the score 11-2 in Toronto's favor, Frye smoked a ball into the right-center field gap, but stopped at first base rather than coast into second; he later recounted: "I was looking at first base coach Garth Iorg and saying, 'What do I do?! What do I do?!' and he goes, 'Stop! Stop!'" There would not be another cycle hit by a Blue Jays player until Cavan Biggio in 2019.

In retirement, he became a bitter critic of the modern game on social media - something not atypical for an old-timer, as Bill James has eloquently pointed out in The New Bill James Historical Baseball Abstract. But in addition to using social media to decry the tendency of the modern game to tend towards more strikeouts, homers and walks, he has also set his sights on denouncing the growing industry of private coaches, who have little or no playing experience beyond high school, who charge parents very large amounts against the promise of turning ther boys into pro players. As he put it: "It has become absolutely ridiculous. To think this person, who never played beyond high school — and when he did he wasn’t very good — to pay him to learn how to play the game." He is similarly critical of similar coaches who claim they can teach kid to increase their pitching velocity - but mostly increase their risk of injury expenentially. “What gets lost in all of this is that the kids aren’t having fun. They want to quit. You don’t have to do all of this.”