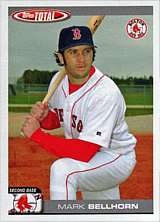 Mark Bellhorn became the first player in National League history to hit a home run from both sides of the plate in one inning, turning the feat in 2002 for the Chicago Cubs. Carlos Baerga was the first player to do it in the American League.

Mark had a good batting eye and solid walk totals, mostly as a part-time player during a ten year big league stay. While his career batting average was just .230, his OBP was a respectable .341 with 164 walks combined solely between his two seasons at close to regular play. Although he originally came up with the Oakland A's as they were fine-tuning their Moneyball tendencies, he may be best known as the regular second baseman with the 2004 Boston Red Sox. Originally signed by the team as infield depth that season, he ended up stepping into a starting role following injuries to Nomar Garciaparra and Pokey Reese and played a career best 138 games while batting .264 with a .373 OBP, 17 home runs and 82 RBI. Although he batted only .191 in 14 postseason games as the Red Sox won their first title in 86 years, he got on base at a .397 clip and contributed six extra base hits (three home runs) and an OPS of .844. He retired after the 2009 season, spent with the Triple A Colorado Springs Sky Sox.