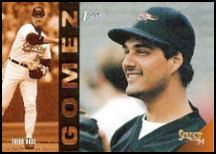 Leo Gómez was signed by the Baltimore Orioles in 1985 as an amateur free agent. He broke into professional baseball in fine fashion, with the 1986 Bluefield Orioles, batting .352/~.496/.693 in just 27 games. His average would have led the Appalachian League had he played enough to qualify and despite missing over half the season, he still was only one home run behind the Bluefield leader. Even though Appy league managers got just a glance at Gómez, they rated him the #10 prospect in the circuit, tied with Geronimo Pena.

Leo moved up to the Carolina League in 1987. For the Hagerstown Suns, Gómez won the batting title with a line of .326/~.440/.538 with 94 runs, 38 doubles, 19 homers, 110 RBI and 95 walks. He led the league in slugging percentage and doubles and tied Casey Webster for the RBI lead. Milt Harper edged him by five points for the OBP lead. In the Year of the Third Baseman in the Carolina League (according to Baseball America, Gómez beat out Webster, Jeff King and Hensley Meulens for the All-Star spot at the hot corner, though Webster (who made the team at DH) won MVP honors and Meulens (who made the All-Stars as a utility man) was named top prospect; Gómez was picked as the second-best hope for the future.

At age 22, Leo moved up to the AA Charlotte Knights but only played 24 games (presumably he was injured most of the season) and hit .292/~.364/.382 with only one homer in 89 at-bats. His progress stunted, he returned to AA in 1989, returning to Hagerstown, which had moved up the ladder. The Puerto Rican infielder hit .281/~.400/.467 with 18 homers and a league-high 89 walks. His 78 RBI ranked second, he was fifth in homers and presumably in the top five in slugging and OBP as well. He made the Eastern League All-Star team at third base, his second minor league All-Star team in his only two full seasons of play.

Gómez spent most of the 1990 campaign with the Rochester Red Wings. Leo hit .277/~.408/.537 with 26 homers, 97 runs, 89 walks and 97 RBI. He led the International League in runs and RBI, was one walk behind the league leader (Jim Walewander) and tied for second in HR, seven behind leader Phil Plantier. He again was presumably among the OBP and slugging leaders. He was named to the All-Star team once again at third base, making him 3-for-3 in full seasons. In the AAA All-Star Game, Leo hit 5th for the AL team, right behind Juan Gonzalez. In his three full years in the minors, he had led his leagues in batting average, slugging percentage, walks, runs, RBI and doubles and had been second in OBP and homers.

Gómez was signed to a minor league contract by the Pittsburgh Pirates in 2001, but didn't play very much that spring, and was let go by the Pirates. As a result, Gómez re-signed with the Dragons, where he batted .306/.398/.546 with 19 HR's and 61 RBI. During his final year with Chunichi in 2002, he batted .267/.344/.502 with 16 circuit clouts and 43 RBI. In his last two years in the NPB, Gómez was plagued by knee injuries. Overall Leo hit .293/.382/.532 in Japan, with 153 home runs. For years he was probably the Dragons' top power threat, leading the club three times and finishing second to Takeshi Yamasaki twice (once trailing by a single homer). Only in his last year did he not finish in the club's top two and his rate of one every 15.4 AB still led Chunichi's regulars.

Overall, Leo hit over 300 homers as a pro baseball player.

Gomez was a coach for the GCL Orioles in 2009 and Aberdeen IronBirds in 2010.

As of 2006, he lived in Baltimore and attends the Biligual Christian Church on Erdman Avenue.