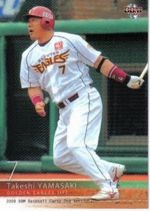 Takeshi Yamasaki won two home run titles in Nippon Pro Baseball in a career that spanned four decades. He was a three-time All-Star through 2007.

Yamasaki was a catcher and sumo wrestler in junior high school. In high school, he hit 56 home runs. He wanted to play for the Yomiuri Giants, but was a second-round pick of the Chunichi Dragons in 1986. He was sent to the US to learn how to play third base in the Arizona Instructional League but never played that position in NPB. He was briefly on loan to the Los Angeles Dodgers system, going 0 for 10 with 3 walks, 4 strikeouts and a run for the 1987 GCL Dodgers.

Yamasaki was 5 for 29 with 5 walks and 11 strikeouts in his NPB debut in 1989; he had more success on the farm, leading the Western League in home runs and RBI. Kozo Shoda stole five bases against him one day, a sign he would not be a catcher for much longer. In 1990, he repeated his homer and RBI titles in the WL and was 3 for 7 with a double and a walk in NPB. That winter, he went into a burning building and saved some lives, earning him a commendation.

Yamasaki blossomed in 1996 as he became a starting outfielder for Chunichi. He hit .322/.382/.625 with 83 runs, 39 home runs and 107 RBI. He edged Hideki Matsui by .003 for the Central League lead in slugging percentage, was 4th in the CL in runs, was second in RBI (two behind Luis Lopez) and led in home runs (one ahead of Matsui and Taiho). He joined Matsui and Powell as Best Nine outfield picks in the CL. He also made his first All-Star squad.

Yamasaki's average fell further but his OPS improved in 1999 by batting .246/.345/.528 with 28 HR. He fractured his wrist late in the season during a collision with Mitsuru Manaka of the Yakult Swallows and missed the 1999 Japan Series, which Chunichi lost.

When the BlueWave merged with the Kintetsu Buffaloes after 2004, Yamasaki was given his walking papers. He signed on with the Rakuten Golden Eagles, an expansion team, hitting .266/.342/.525 with 25 homers as the team's cleanup hitter and designated hitter. He hit the first pinch-hit home run in franchise history on May 7. He picked up his 1,000th career hit that season. He led the new team in homers that season, 9 ahead of runner-up Koichi Isobe.

Yamasaki had yet another comeback season in 2007 at age 38. He produced at a .261/.359/.577 rate with 86 runs and a career-high 43 homers and 108 RBI. He made his third All-Star team. He and Fernandez set a Pacific League record when they hit grand slams in the same inning against the same pitcher, Masato Yoshii, on April 1. He tied Hirotoshi Kitagawa for the PL lead in sacrifice flies. His 142 strikeouts were second in the PL to Tuffy Rhodes and his 71 walks were also second to Rhodes. He ground into 28 double plays, leading the league. He was second to Rhodes in slugging percentage as well. He finished second in runs, trailing Hichori Morimoto instead of Rhodes. The Rakuten slugger most notably led the league, though, in homers (one ahead of Rhodes), RBI (12 ahead of Rhodes) and total bases (292, 12 more than Rhodes). 11 years after his first home run crown, he had claimed his second. He was helped by an injury that sidelined Rhodes for the last couple weeks. Still, it proved to be yet another amazing comeback. Amazingly, Yamasaki was far from being the oldest home run leader of 2007 - 46-year-old Fausto Álvarez led Hoofdklasse, 8 years older than the Rakuten DH. Yamasaki made the Best Nine for the second time of his career. Yamasaki's salary was more than doubled for 2008, from 82.5 million yen to 192 million yen. In 2008, he had 26 home runs and 80 RBI.

His hobby is radio-controlled cars.