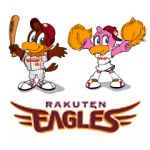 Rakuten, Japan's largest online shopping center, was denied by the Japanese baseball establishment in their attempt to buy a financially struggling team in 2004. When the Orix Blue Wave and Kintetsu Buffaloes merged to form the Orix Buffaloes, the Pacific League was down to 5 teams; Rakuten put in a bid for a new franchise and was approved.

The Tohoku Rakuten Golden Eagles began play in 2005 and won their opener 3-1, but lost their second game 26-0, tying the worst shutout in Nippon Pro Baseball history as the team got one-hit. They were the slowest team ever to 10 wins, starting 9-37 before taking three straight interleague games from the defending Central League champions, the Chunichi Dragons.

Finishing last in their initial season, the Golden Eagles will finish last in the Pacific League in runs and runs allowed. Veteran sluggers Takeshi Yamasaki and Koichi Isobe have led the team, as gaijin imports Luis Lopez, Andy Tracy, Damon Minor, Gary Rath and Kevin Hodges all disappointed and top prospect Yasuhiro Ichiba did not live up to early expectations. As with most expansion teams, hope remained several years down the line.

Rakuten finished last again in 2006 but improved to 4th in 2007 and made the playoffs in 2009. They slid backwards in 2010 then had a couple seasons around .500. In 2013, they won their first PL pennant, thanks to a 24-0 season from ace Masahiro Tanaka, a 15-9 season from rookie Takahiro Norimoto and 54 homers from imports Casey McGehee and Andruw Jones (the league leader in walks). In the 2013 Japan Series, they topped the Yomiuri Giants, with Manabu Mima the surprise hero with two stellar starts after Tanaka dropped game 6 for his lone loss of the year.