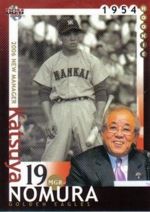 One of the greatest catchers in Nippon Pro Baseball, Katsuya Nomura was known for his slugging hitting and his endurance behind the plate. He hit 657 home runs in his 25-year career (1954, 1956-1980) and led the Pacific League in homers eight straight seasons. In 1965, he won the league's first Triple Crown.

Also a leading manager, Nomura managed in three Japan Series between 1970 to 1977 and 1990 to 2002. He lost a position leading the Nankai Hawks because of his wife Sachiyo Nomura's interference with the club and also lost a job managing the Hanshin Tigers due to her tax evasion. Following this incident, Nomura was hired as manager of the industrial league team, Shidax Baseball Club from 2003 to 2005. Nomura was hired to manage the Rakuten Golden Eagles for the 2006 season. Before the season even began, he got into hot water for calling Kazuhisa Ishii and Atsuya Furuta "homo" and for calling on the Pacific League to forbid announcement of starting pitchers before game time and the elimination of external sources for managerial use for information during the game. He also banned facial hair and brown hair dye (even though Rakuten's owner dyed his hair brown).

Nomura has also been notorious for not getting along with foreign players - he let Larry Parrish go in 1990 after Parrish had led the Central League in home runs; he let Tom O'Malley go in 1997 after six straight .300 seasons and two years after he was league MVP and he got into a long dispute with pitcher Darrell May in 1999.

In 2007, Nomura became the first NPB manager with over 1,000 wins but a losing record overall.

He is also the stepfather of Don Nomura and father of Katsunori Nomura.