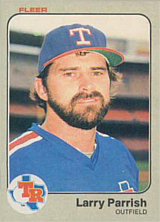 Larry Parrish played fifteen years in the major leagues, hitting over 250 home runs. He later played in Japan, managed in the minors and was the Detroit Tigers' manager in 1998 and 1999.

Undrafted out of high school, Parrish was signed by the Montreal Expos as a free agent in 1972 and played from 1972-1974 in the Montreal Expos' minor league organization. He showed moderate power, patrolling the outfield in his first season with the Jamestown Falcons of the New York-Penn League in 1972, then converting to third base with the West Palm Beach Expos in 1973. Despite some defensive struggles - he committed 31 errors -, he was named the Florida State League MVP after hitting .293 with 16 homers and 33 RBI (with 82 runs scored). He had another good year with the Double A Quebec Carnavals in 1974, hitting .284 with 13 homers and 77 RBI and was an Eastern League All-Star. That earned him a call-up to the big league club in September.

Parrish made his major league debut in September 1974 and while hitting only .203, showed enough to become a regular for the Expos in 1975, jumping all the way from Double A to the majors. He had a solid rookie season as a 21-year-old in 1975, hitting .274 with 10 homers and 65 RBI, with 32 doubles, but was outshined by teammate Gary Carter, who finished second in the Rookie of the Year voting, while Parrish tied for third but was named to the 1975 Topps All-Star Rookie Team. He remained the Expos' regular third baseman through 1981. Teammates included Carter, Warren Cromartie, Andre Dawson, Tim Raines and Tim Wallach. Wallach, who played mostly outfield in 1981, would replace Parrish at third base from 1982 on.

Larry slumped badly in 1976, hitting only .232, although he still had good power with 28 doubles, 11 homers and 5 triples. Still, the Expos were concerned, and acquired veteran Wayne Garrett in midseason. He took some playing time away from Parrish in 1977, as Larry played only 123 games, but bounced back to .246 with 11 homers and 46 RBI. On May 29th, he had a three-homer game, scored 5 and drove in 5 in a 14-4 win over the St. Louis Cardinals. He was 5-for-5 that day and got hits in his first two at-bats the next day to make it seven hits in a row. He continued to improve in 1978, with Garrett out of the picture, to .277 in 144 games, with 15 homers and 70 RBI, both career highs up to that point. Larry's top year with the Expos was 1979, when he hit 30 home runs with a .307 batting average. His .551 slugging percentage was an Expos team record at the time, while his OPS+ was an outstanding 146. He made the All-Star team, was fourth in the MVP voting and was named Expos Player of the Year, playing for a team that won 95 games and fell shy of an NL East title on the season's last day, losing out to the eventual World Champions, the Pittsburgh Pirates.

Parrish suffered through an injury-filled 1980 season, being limited to 126 games and a .254 average, although he did produce 15 homers and 72 RBI. He suffered a broken wrist when hit by an Ed Whitson pitch on May 3rd and rookie Brad Mills filled in while he went on the disabled list; he had already been suffering from wrist problems since the previous season, and the pain would last until well into the next year. The Expos once again fell just shy of a division title, bowing out to the Philadelphia Phillies on the next-to-last day of the season. In 1981, he played 97 games - almost every game in that strike-shortened year, despite a young Wallach making the club and striving for playing time. Parrish was caught in a slump all season, until emerging as the Expos' best hitter in September, when he drove in 25 runs and the team finally secured a spot in the postseason by finishing a half-game ahead of the St. Louis Cardinals in the second-half standings. He hit .244 with 8 homers and 44 RBI overall. He started all 10 of the Expos' postseason games at third base that year, going 3 for 20 in the NLDS against the Phillies, and 5 for 19 with a pair of doubles in the heart-breaking loss to the Los Angeles Dodgers in the NLCS.

At the end of spring training 1982, he was sent to the Texas Rangers, along with first baseman Dave Hostetler, as part of a trade for Al Oliver on March 31st. Wallach was ready to take over at third base, and the Expos wanted to add another left-handed bat in a right-handed heavy lineup. Parrish would spend almost all of the rest of his major league career as a regular outfielder and DH for the Rangers. Buddy Bell, a Gold Glover, was entrenched as the Rangers' third baseman, leaving Parrish no choice but to change positions. He began extremely slow in 1982, as he was hitting .186 with a single homer and 8 RBI on July 4th, but finished with a bang, hitting .264 with 17 homers and 71 RBI for a very poor team. Between July 4-10th, he became the second player in history, after Jim Northrup, to hit three grand slams in one week. He would go on to hit 20 or more homers four times for the Rangers, in 1983, 1984, 1986 and 1987. Perhaps his most notable year was 1987, when he hit 32 home runs with 100 RBI, having previously reached 101 RBI in 1984. He made the All-Star team for the second time in 1987.

Parrish had off-season knee surgery after his stellar 1987 season, and was hitting only .190 after 68 games in 1988 when he was released on July 9th. He signed with the Boston Red Sox and spent the rest of the season with the division-winning team, often playing first base, a position he had not previously played in the majors. He hit .259 with 7 homers and 26 RBI in 52 games for Boston, appearing in the postseason for the second and last time when he went 0 for 5 against the Oakland Athletics in the ALCS. It was the years of collusion, and there was little demand for his services as a free agent after the season, so he explored other options.

After his major league career ended, Parrish played two seasons in Japan. In 1989 he made the Best Nine at 1B after a .268/.320/.562 year for the Yakult Swallows, joining his former teammate Warren Cromartie on the Best Nine squad. He led the Central League in home runs (42), beating out Cecil Fielder and Hiromitsu Ochiai but the Swallows released him because of his tendency to whiff (129 strikeouts), his poor defense at first and a bad knee. Parrish expressed amazement that he was released after the best year of his career. In The Meaning of Ichiro Robert Whiting includes Parrish as one of many gaijin to be let go by Swallows manager Katsuya Nomura due to his disdain for American players. He signed on with the Hanshin Tigers to replace Fielder in 1990. That year he hit .249/.331/.512 with 28 home runs. He again made the All-Star team. For the second consecutive season he led the Central League in double-play grounders. A knee injury that August ended his pro career.

In 1992 and 1993, Parrish managed the Niagara Falls Rapids, and in 1994 replaced Joe Sparks as Toledo Mud Hens manager. He was a roving hitting instructor in 1995 and the beginning of 1996, then replaced Bill Plummer as manager of the Jacksonville Suns in mid-year. He was the bench coach of the Detroit Tigers in 1997 and 1998 and managed the team in 1998 and 1999. In 1997, he was one of the finalists for the Tampa Bay Devil Rays managerial opening but lost out to Larry Rothschild. Parrish was a Tiger scout from 2000-2002, and in 2003 became manager of the Toledo Mud Hens for a second stint.

Parrish led the Mud Hens to back-to-back Governors' Cup Championships in 2005 and 2006. He was supposed to manage the team again in 2007, but had to have surgery on his ankle on April 4th for a degenerative condition and spent the year in convalescence as Mike Rojas took over his managerial duties, although Parrish did do some roving instructing for the Tigers. He returned to the fold in 2008 and led the team for three more seasons. In 2011, he moved to the Atlanta Braves as the team's hitting coach but kept the position for only one season. In 2013, he returned to managing in the Tigers' system for three more years.