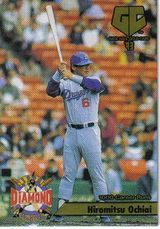 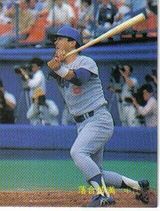 The youngest of seven children, Hiromitsu Ochiai is known as the exception to the Japanese baseball culture's way of conformity and structure. He wouldn't take batting practice or infield practice if he didn't want to. He refused to change his bucketfoot swing despite many coaching efforts to do so (who knows how many hitters batting coaches have screwed up by tinkering with what works). He quit college due to arguments with his coaches over their rigorous training methods. After considering going into bowling, he signed on with Toshiba Fuchu in the industrial leagues. He was Japan's starting first baseman in the 1978 Amateur World Series, hitting .265/.413/.519 in the event with 9 walks in 10 games. He drove home a team-high 13 runs, tying Ben Richardson for third in the Series, trailing only Antonio Muñoz and Tim Wallach. He was drafted by the Lotte Orions in 1978. Two years later, in the minors, he set an Eastern League record by homering in five straight games.

In 1983 Ochiai kept it up - .332/.419/.563 and won his third straight batting championship (the fourth player to do so). Moving to first base, he again made the Best Nine and All-Star team. 1984 was a .314/.436/.581 season - he led the league with 98 walks, starting a strong run on that front. Now at third base, he made the Best Nine at a third different position. That season Boomer Wells was making a bid at the Triple Crown; Ochiai said that a foreigner should not win it and tried to catch Wells in homers. Wells says that teammate Yutaro Imai grooved pitches to Ochiai to try to help him out. Ochiai fell 4 homers shy of Boomer, 37 to 33.

1986 also saw Ochiai dominate the league - .360/.487/.746. He led the league in batting, homers (50, the first player to reach 50 two years in a row), runs (98), RBI (116), walks (101), OBP and slugging. He again was an All-Star and Best Nine but failed to repeat as MVP (Hiromichi Ishige won it). He suffered horrible back pain that year which seemingly had no impact on his fine performance at the plate. He became the only player in NPB history to win three Triple Crowns. Amazingly, he had predicted all three; he would predict one in 1987 but failed to follow through.

Amazingly, Lotte let Ochiai go after the '86 season. Michiyo Arito took over as Orions manager and didn't like people who couldn't conform to Japanese baseball culture; previous manager Kazuhisa Inao had been known for having a more relaxed and open approach. So he refused to play (or misused) Leron Lee and had Ochiai traded to the Chunichi Dragons.

1989 witnessed Ochiai become the first player in NPB history to win RBI titles in both leagues. The 35-year old slugger hit .321/.410/.626. He led the league in total bases (298) and walks (75) in addition to RBI (116). He returned to third base and again was an All-Star and Best Nine. For the only time in a 6-year period, he failed to lead his league in runs scored. Larry Parrish edged the fading Ochiai in the home run pace, 42 to 40 and Cecil Fielder edged him by two points in the slugging race.

In 1994, Ochiai left Chunichi via free agency, signing with the Yomiuri Giants. The 40-year old still could have a strong role though his OBP fell under .400 and his SLG under .450 for the first time as a starter - he batted .280/.393/.423. He was third in the Central with 81 walks. More importantly, he was part of a Japan Series champion for the first time.

Alonzo Powell describes Ochiai as "an American in a Japanese body" and thanks Ochiai for convincing him not to listen to batting coaches. Leron Lee said that Ochiai had trouble with the media "because he told people exactly what he thought, and Japanese aren't supposed to do that."

After retiring, Ochiai became a baseball commentator. In 2004 Ochiai was hired to manage the Dragons. He scaled back Japan's intensive practices and was very successful (just like Bobby Valentine, another opponent of Japan's training who was having success with Chiba Lotte). The Dragons went to the Japan Series in Ochiai's first year at the helm and came their closest to winning since 1954; they went to 7 games before falling. Ochiai piloted Chunichi to the 2006 Japan Series but they again lost. He failed to lead them to the Central League's best record in 2007, but that year the league began a playoff system and Chunichi defeated the favored Yomiuri Giants to advance to the 2007 Japan Series. In the Series, they won 4 games to 1. The final game was not without controversy when Ochiai yanked starter Daisuke Yamai one inning away from the first no-hitter and perfect game ever in the Series. Closer Hitoki Iwase completed the historic perfecto, the first combined perfect game in NPB's 71-year history. Ochiai won the Matsutaro Shoriki Award for his efforts that year. He led the team to four CL titles in 8 years, before stepping down; he was succeeded by Morimichi Takagi.

The big question is how impressive Ochiai's career totals would have been if Japanese baseball culture had been more tolerant of individualism and he wouldn't have had to wait till age 28 to become a starter as a result.