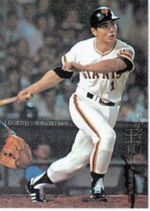 "As the ball makes its high, long arc beyond the playing field, the diamond and the stands suddenly belong to one man. In that brief, brief time, you are free of all demands and complications." - Sadaharu Oh

A schoolboy hero at Waseda Jitsugyo High School, Sadaharu Oh is the best known player from the Nippon Pro Baseball not to play in the United States. He led his high school to victory in the 1957 Koshien Tournament even though his pitching hand was bleeding from a ruptured blister. Oh ordered a teammate not to tell the manager about it due to his desire to stay in the game.

Oh debuted with the Yomiuri Giants in 1959. After an inauspicious debut, when he hit just .161 with 7 homers, Oh worked with Hiroshi Arakawa, the Giants' batting coach who instilled zen and samurai training and changed his batting stance in which he raised his right leg before he swung the bat. It worked wonders.

Beginning in 1963, Oh had a .300 batting average with at least 40 home runs for eight consecutive seasons. He rapidly climbed the home run charts. In just his 14th season, he hit his 500th home run.

While Oh slammed home runs in Japan, Hank Aaron was attacking Babe Ruth's home run record in the United States. Oh was six years Aaron's junior so he had several years to catch up. While Aaron hit his 715th home run in 1974 age 40, Oh passed 600 home runs at age 34 in 1974.

In celebration of their status as home run kings, Aaron and Oh met in a home run hitting contest before an exhibition game in Tokyo in November 1974. Aaron won 10-9. An account of the day can be found here

Oh continued to play for the Giants until he announced his retirement in 1980. His career ledger shows 868 home runs, 2786 hits, and 2390 walks. He led the league in home runs 15 times and was elected MVP nine times.

Oh was the scion of a Taiwanese father and a Japanese mother - his surname Oh is the Japanese pronunciation of the common Chinese surname Wang. As a result, he was not beloved by fans like his teammate Shigeo Nagashima. The pair did combine to lead the Giants to nine consecutive Japan Series crowns. They took the nickname of the O-N Cannon. 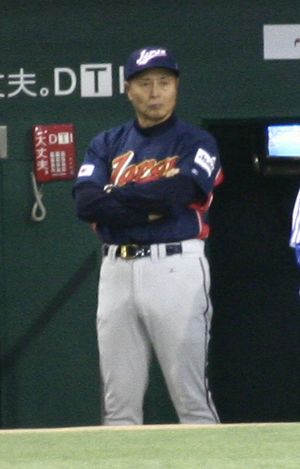 Oh coaching the Japanese team at the 2006 World Baseball Classic

In retirement, Oh worked as a field manager. From 1984 to 1988, Oh managed the Yomiuri Giants. He was general manager, manager and vice president of the Fukuoka SoftBank Hawks, a position he has held from 1995 when they were the Fukuoka Daiei Hawks until 2008. The Hawks won the Nippon Series in 1999 and Pacific League pennants in 2000 and 2003. Oh managed the Japanese team to the championship in the inaugural World Baseball Classic in 2006.

On July 5, 2007, Oh announced that he would be leaving the Hawks for an indefinite period due to a stomach tumor. On July 17th, he underwent a gastrectomy at Keio University Hospital to remove his stomach. Oh's wife, Kyoko - with whom he had three daughters - died of stomach cancer in December 2001 at age 57. He was released from the hospital on August 2nd. He announced his retirement a year later.