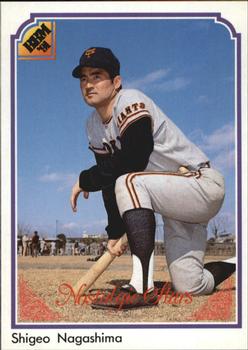 Considered by many to be the greatest player in the history of Nippon Pro Baseball, Shigeo Nagashima was the star third baseman for the Yomiuri Giants from 1958 to 1974. He is unquestionably the most popular player in the history of Japanese baseball. Nagashima's legacy is closely intertwined with that of long-time teammate Sadaharu Oh as the "ON" attack led Yomiuri to a record nine straight Japan Series victories. While considered a great natural athlete, Nagashima was renowned for his practices - he got a house by the river so he could run every day there and he built a room in his home to practice his swings in constantly. He combined talent with an excellent work ethic. He is also the father of Kazushige Nagashima. He was inducted into the Japanese Baseball Hall of Fame in 1988.

Nagashima began playing baseball in the fourth grade (his mother made his glove) and was a star at college, winning two batting titles in the Tokyo Big Six University League and setting a home run record. He helped the Japanese national team win the 1955 Asian Championship, their first Asian Championship. He considered signing with the Nankai Hawks but instead signed with the Giants. He was 0 for 4 with 4 K's in his debut against Masaichi Kaneda and began his career 0 for 9. It didn't take long for Nagashima to establish himself - he hit .305/.353/.578 as a rookie, becoming the first freshman to lead the league in RBI (92) - he also led in runs (89), doubles (34), slugging, homers (28) and total bases. His 28 homers were a new rookie record and he lost a chance at another when he forgot to touch first base. He made the Best Nine team at third base - he would not be dislodged from the Best Nine during his entire career.

Homering for the emperor and the first batting title[edit]

In '59, Nagashima got even better, hitting .334/.426/.612 - he won the first of six batting titles (the Central League record, one behind Ichiro Suzuki for most batting championships). That year Nagashima got a new teammate, a struggling rookie named Sadaharu Oh - the Oh-Nagashima combo would become the most famous in Japanese baseball history and they got known as the "ON" power attack. 29 times they hit homers back-to-back and 106 times they both homered in the same game; both are NPB records. In 1959 Nagashima also homered in the first game ever attended by the Emperor of Japan.

These are very impressive stats and lots of people thought he would have been a star in the US, but what basis is there for a claim that he was better than Oh, who had much better stats? It is hard to deny to the role of race - Oh had a Taiwanese father while Nagashima was "100%" Japanese. Given Japanese attitudes to foreigners in their heyday, it is understandable how Nagashima got more credit for lesser performance. Additionally, from a baseball perspective, Nagashima played at a position more important on the defensive spectrum - a third baseman to Oh's first base spot. Perhaps also you can look at the fact that Nagashima was an instantaneous success, while Oh took several years to develop into a powerhouse (though he had a better peak and a longer career than Nagashima).

The Oh-Nagashima Giants were unstoppable in their prime; they won a record 9 straight Japan Series from 1965 to 1973. The fact that the team stopped winning Japan Series annually when Nagashima retired also may have helped play a role into the claim that he was better than Oh. He ranks first all-time in the Japan Series in hits (91), total bases (184) and RBI (66).

After retiring as players, both Oh and Nagashima became managers of the Giants. Nagashima was at the helm from 1975 to 1980 while Oh was still playing - he took them to two Japan Series but they lost both and several finishes around .500 cost him the job. In 1975, his first year at the helm, the Giants finished in last place for the first time ever. A foreign manager would likely have been fired on the spot; the popular Nagashima was allowed to stay to rebuild. Oh managed the team from '84 to '88, taking them to one Japan Series - while they never finished in the second division under him, they let him go as well. Nagashima was rehired as Giants manager in 1993. He finally won a Japan Series as manager in 1994 and repeated in 2000, when he squared off against Oh, then managing the Daiei Hawks. The matchup of the two longtime teammates was the major focus of the Japanese sports media that year. In 2001, Nagashima managed his final season. Shane Mack praised Nagashima's treatment of his gaijin players. Giants owner Tsuneo Watanabe (the George Steinbrenner of Japan) once saw Nagashima talking to an agent at a dinner party and promptly publicly scolded him for daring to associate with agents.

Nagashima managed the Japanese squad to a Gold Medal in the 2003 Asian Championship.

Nagashima, formerly wooed by American teams, was a critic of the Japanese players who went to the US to play, from Hideo Nomo on. He wrote an op-ed criticizing Hideki Matsui for abandoning the Giants, the first star to jump Japan's top team historically (and Nagashima's lifelong team).

In March 2004 Nagashima suffered a stroke which partially paralyzed the right side of his body. He was supposed to manage Japan's team in the 2004 Olympics but was replaced by Kiyoshi Nakahata after the stroke. He did not return to the Tokyo Dome until halfway through the 2005 season - his return was a much-anticipated day by the baseball establishment in Japan, who expected his presence watching a game to boost slumping ratings (I think this says something about the esteem Nagashima is held in in Japan). Eric Hillman describes Nagashima's popularity as a "cross between Sean Connery and Mickey Mantle. He's one of the best-looking guys in Japan and he has notoriety that is just beyond belief."

Primary sources: Gary Garland's www.japanbaseballdaily.com was very helpful as my main source. "Remembering Japanese Baseball" by Rob Fitts and "The Meaning of Ichiro" by Robert Whiting came in handy as well. Taiwanese Baseball Wiki showed him playing in the 1955 Asian Championship