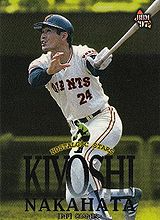 Kiyoshi Nakahata played 13 seasons for the Yomiuri Giants and made six All-Star teams.

Nakahata was MVP of the Tokyo Metropolitan University League's fall season as a sophomore. He hit .350 in college and was picked in the 3rd round by Yomiuri in 1975. He debuted in Nippon Pro Baseball in 1977, going 2 for 5. In 1978, he went deep off Mario Soto in an exhibition game. He was 1 for 3 that year for Yomiuri.

He became the first head of the Japan Professional Baseball Players Association in 1985 and held that role for four years until succeeded by Tatsunori Hara.

Nakahata later was a baseball commentator on NTV. He coached for the Giants. When Shigeo Nagashima (Nakahata's former skipper) had a stroke prior to the 2004 Olympics, Kiyoshi took over the helm of the Japanese national team and led them to a Bronze Medal.