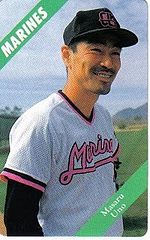 Masaru Uno was a three-time Best Nine selection. Primarily a shortstop, Uno did not fit the prototype for the position, noted for his power.

The Chunichi infielder hit .274/.349/.570 with 41 home runs, 82 runs and 91 RBI in 1985. He set a new NPB record for homers by a shortstop but was 13 behind CL leader Randy Bass, who had one of the best seasons in league annals. Uno didn't even win Best Nine honors for his great season - those went to Yutaka Takagi, a better contact hitter and base runner.

Through 2009, he is tied with Atsushi Nagaike for 27th in NPB history in home runs and 17th in strikeouts.