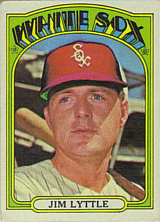 Jim Lyttle was drafted in the 1st round of the 1966 amateur draft by the New York Yankees with the 10th overall pick. He played in the major leagues for the Yankees, Chicago White Sox, Montreal Expos and the Los Angeles Dodgers in a MLB career spanning from 1969 through 1976. He then played in Japan for the Hiroshima Carp and Nankai Hawks from 1977 through 1983.

He hit .310 for the Yankees in a part time role in 1970. He never could establish himself as a regular in the majors as the 87 games he played that season were a career high, and even then he only had 126 at-bats. His busiest season in that regard was his final one, 1976, split between the Expos and Dodgers, when he had 153 at-bats and hit .243 with 1 homer. The last-place Expos released him at the end of July to give some younger outfielders a look, and the Dodgers picked him up because they had a few injuries in August and wanted a replacement with big league experience.

He had a 472 consecutive games played streak in Japan at one point. He played on two Nippon Series championship teams with Hiroshima in 1979 and 1980. He was a teammate of Adrian Garrett on the 1979 Nippon Series Championship team. The Hiroshima Toyo Carp (led by Garrett, Lyttle, Koji Yamamoto and Sachio Kinugasa), became the first Japanese team to hit 200 home runs in a season that year. He was named MVP of the 1980 Nippon Series after he hit 3 home runs and drove in 6 runs while batting .400 to defeat Charlie Manuel and the Kintetsu Buffaloes. He was voted to one All-Star Team while in Japan, in 1981. He put up spectacular stats that year: he led the Central League with 157 hits, hit 33 home runs, collected 100 RBI, hit .318 and had an OPS of .940 in only 128 games. He hit 166 home runs, had 945 hits and had a career OPS mark of .816 during his career in Japan; he also won 4 Diamond Gloves.