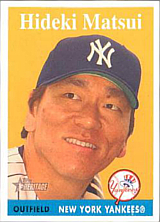 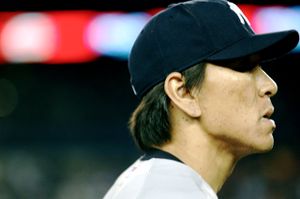 Hideki Matsui played for the Yomiuri Giants for ten years. A huge power threat, he was expected to break Sadaharu Oh's NPB record of 55 home runs and was given uniform number 55, due to this. His highest total was 50 in 2002 in his final season in Japan. In 2003 he signed with the New York Yankees.

Matsui played 1,768 consecutive games before fracturing his wrist while diving to catch a liner by Mark Loretta on May 12, 2006. He had played in 518 consecutive games to begin his MLB career, breaking the record previously held by Ernie Banks (424). Banks did it from 1953 to 1956 and he played shortstop during the streak. Al Simmons of the Philadelphia Athletics held the American League record of 394, from 1924 to 1926, playing the outfield during the streak. Both Banks and Al Simmons are Hall of Famers.

Matsui was the first player ever to be named Japan Series MVP (2000) and World Series MVP (2009). Matsui's 6-RBI game in the 2009 Series tied Bobby Richardson's 49-year-old World Series record; it was only two years before Albert Pujols tied that duo. After securing that last honor, he became a free agent and signed with the Los Angeles Angels of Anaheim for the 2010 season. He became a member of the Oakland Athletics in 2011. On July 20, he his 500th homer between Japan and the United States, a solo shot against Duane Below of the Detroit Tigers. The 500 total included his 10 postseason homers hit in the U.S. He finished the season hitting .251 in 141 games, with 28 doubles but only 12 homers and 72 RBI as the A's primary DH.

Hideki did not immediately find a team for the 2012 season, waiting until April 30th before signing with the Tampa Bay Rays. After spending time in the minor leagues to find his form, he was called up to Tampa on May 29th, homering in his second at-bat of the season off Chicago's Philip Humber. However, he played little over the next few weeks, and his production did not warrant much more playing time. On July 25th, his batting line stood at .147/.214/.221 in 95 at-bats when he was designated for assignment by the Rays to make room on the roster for the newly-acquired Ryan Roberts. He did not play again that season and on December 27th officially announced his retirement at a press conference in New York, NY.

He was elected to the Japanese Baseball Hall of Fame in the class of 2018; Tomoaki Kanemoto was the other player to make it on the Sportswriters ballot that year. At age 43, he was the youngest elected player, two years younger than Hideo Nomo had been. He also became eligible for Cooperstown in 2018 but received just 4 votes and dropped off the ballot. 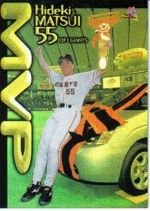 In Game 3 of the 2004 ALCS, Matsui tied the record of 5 runs in a postseason game. He is the only player ever to have at least 5 runs and 5 RBI in the same postseason game.