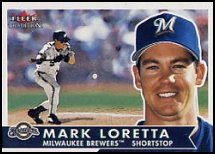 Drafted by the Milwaukee Brewers in the seventh round of the 1993 amateur draft, Loretta debuted with the Brewers in 1995. He was sent to the Houston Astros in the 2002 midseason and came to the San Diego Padres as a free agent in 2003.

Loretta was a patient contact hitter with an excellent eye for balls and strikes, being one of the better two-strike hitters around. He also could hit-and-run, lay down a bunt, and had average speed, but was a smart enough runner to take as many bases as the defense allowed. A solid second baseman, Loretta was fundamentally sound, positioned himself well and turned the pivot adeptly. His most productive year came in 2004 for the Padres, when he batted .335 with 47 doubles, 16 home runs, 76 RBI, 108 runs scored, and 208 hits – all career bests, and good enough to earn him a spot on the National League All-Star team. His .335 average ranked him third in the National League batting race behind Barry Bonds (.362) and Todd Helton (.347), and he also joined Tony Gwynn as the only San Diego players to have 200 hits in a regular season.

On January 4, 2007, Loretta returned to Houston signing a one-year contract worth $2.5 million. He retired in January of 2010 and was hired by the Padres as a special assistant to baseball operations, reuniting with Jed Hoyer. In 2019, he was named bench coach of the Chicago Cubs. He replaced Brandon Hyde, who had been named manager of the Baltimore Orioles earlier that off-season. However, he was let go when manager Joe Maddon left the team at the end of the season. Loretta also served as the 2012 Israel national baseball team hitting coach when Israel was trying to qualify for the 2013 World Baseball Classic.

Loretta is probably the top major leaguer ever to come out of Northwestern University, although alumni Joe Girardi and Gene Oliver also had substantial major league careers.