Note: This page leads to Hall of Fame outfielder Tony Gwynn; for his son who played from 2006-2014, click here 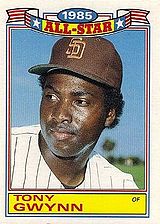 "It's rare, and becoming rarer, that one man is so identified with a franchise and a city as Tony [Gwynn] is with San Diego and the Padres." - George F. Will 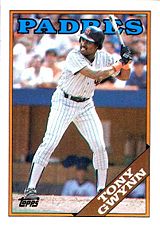 Tony Gwynn was easily one of baseball's best pure hitters of all time. He played 20 years in the majors, all with the San Diego Padres, with a lifetime .338 batting average and 3,141 hits. A perennial .300-plus batsman, he was especially difficult to strike out and once hit an incredible .394 in a season.

Gwynn was signed by the Padres and scout Cliff Ditto as the third round pick of the 1981 amateur draft and made his pro debut that summer. He split the year between the Walla Walla Padres, with whom he hit .331 to win the Northwest League batting crown and MVP award, and the Amarillo Gold Sox, where he hit .462 in 23 games. He hit .328 for the Hawaii Islanders in 1982 and made his big league debut with the Padres in July. He hit .289 in 54 games that year; it was considered an excellent start to his career, but it would be the only season in which he failed to hit .300 in the majors! After beginning 1983 on the disabled list, he hit .342 in 17 games with the Las Vegas Stars before returning to the majors for good in June. His .309 average in 82 big league games that season turned out to be the second lowest of his career, tied with the 1990 season. In his 20 years, he never had an OPS+ below 100, with the 105 he achieved in 1983 being his lowest ever.

Gwynn led the National League in batting eight times, and came close to hitting .400 in 1994 when he hit .394. That number is the highest batting average for anyone over a full season since Ted Williams became the last player to hit .400 in 1941. He was named to 15 All-Star Games, won five Gold Gloves for his fielding prowess, and stole 319 bases. He was no mere singles hitter: he hit a lot of doubles and triples, with highs of 49 doubles in 1997 and 13 triples in 1987. He also drew a lot of walks and was a very good baserunner, leading the National League in runs scored in 1986 and stealing as many as 56 bases in a season (in 1987). He is the only player to have been a member of both Padres teams that played in the World Series, in 1984 and 1998 and he started all 9 games the Padres have played in the Fall Classic. He hit .500 (8 for 16) with a homer and 3 RBI when the Padres were swept at the hands of the New York Yankees in the 1998 Series.

He never won the MVP award, but was in the top 10 seven times, and came as close as 3rd in 1984 when his team went to the World Series. Many persons think he should have win the award in 1987, when it was given to Andre Dawson; in a revote conducted by sportswriters in 2020, he finished first in a tight race, but in the real vote, he was just 8th. He ranks 21st all time on the Black Ink test of assessing player performance and 17th on the Hall of Fame Monitor test. 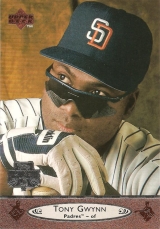 His brother, Chris Gwynn, was taken in the first round (10th overall) in the 1985 amateur draft and played ten years in the majors. His son Tony, whom Tony coached in college, was a 2nd-round draft pick and collected his first major league hit in 2006 for the Milwaukee Brewers, 24 years to the day after Tony's first hit, July 19, 1982. Both were doubles to right field.

On January 9, 2007 Gwynn was elected to the Hall of Fame in his first year of eligibility. He received 532 of 545 possible votes. He was inducted with Cal Ripken in July of that year. He was a 2002 inductee of the San Diego Padres Hall of Fame and his #19 was retired by the club in September 2004. A statue of Gwynn was unveiled at Petco Park in 2007.

In retirement, Gwynn battled oral cancer, twice having malignant tumors surgically removed in 2010 and 2012. He attributed the cause of the disease to his use of smokeless tobacco during his career and afterwards, finally quitting the habit after 30 years when his health problems surfaced. He was unable to beat the disease, however, as he passed away from salivary gland cancer in 2014 at the age of 54. His death was mourned throughout baseball, with Commissioner Bud Selig underlining his on-field accomplishments as well as his exuberant personality and his off-field work with children. He was honored across Major League Baseball with a moment of silence the day he died and prior to their first game back in San Diego on June 18th, the Padres paid him tribute by lining up around his number 19 etched in the outfield grass. They also etched a figure in the shape of home plate with his number, which they wore on their caps.

On May 23, 2016, Gwynn's family, including his wife Alicia and children Tony and Anisha, filed a wrongful death lawsuit in San Diego Superior Court against tobacco giant Altria Group Inc. (formerly known as Philip Morris) and other parties claiming they failed to disclose the addiction risks linked to their products. In particular, they accused the tobacco industry of waging a vast marketing effort aimed at getting youngsters, African-Americans and athletes to use smokeless tobacco, an effort to which Gwynn fell victim. In May 2017, the family narrowed the suit to a single defendant, the U.S. Smokeless Tobacco Company, in order to simplify proceedings. In typical tobacco industry fashion, the defendant fought the allegations with what one observer described as "scorched earth litigation tactics", asking for a huge amount of information from dentists, medical practitioners, pharmacists, other health care providers, Major League Baseball, and others. They were presumably trying to establish a case that Gwynn's cancer was somehow unrelated to his tobacco chewing habit, in spite of the overwhelming scientific evidence linking the habit with Gwynn's fatal condition. In September 2018, the family reached a settlement with the company, whose terms were not revealed.

At the 2016 All-Star Game, played at Petco Park in San Diego, Commissioner Rob Manfred announced that the National League batting title would henceforth be known as the "Tony Gwynn Award", a fitting tribute to the eight-time winner. Its American League counterpart was named the "Rod Carew Award", in honor of Rod Carew. On May 9, 2017, on what would have been Tony's 57th birthday, a life-size statue depicting him in uniform holding his daughter Anisha in his arms was unveiled in Lake Poway Park in his hometown of Poway, CA.

"The only way to pitch to Tony is throw the ball down the middle and hope he hits it at someone." - Al Leiter