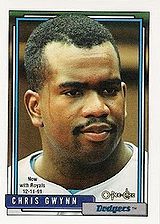 Chris Gwynn was signed by the Los Angeles Dodgers and scout Dennis Haren as a 1st round pick in the 1985 amateur draft.

Gwynn played ten years in the big leagues, mostly with the Los Angeles Dodgers. However, he had the most at-bats in one season with another team, the Kansas City Royals in 1993, when he hit .300 in 287 at-bats.

Gwynn is usually thought of as an outfielder, which was the fielding position that he played more than any other. However, he was often a pinch-hitter or pinch-runner, appearing in more than 300 games when he did not appear in the field.

The brother of Tony Gwynn and uncle of Tony Gwynn, Jr., Chris Gwynn became a scout for the San Diego Padres once his playing career ended. He signed Drew Macias and Leo Rosales. In 2011 he was the Director, Player Personnel for the Padres, then on November 1st was appointed as the Director of player development for the Seattle Mariners.