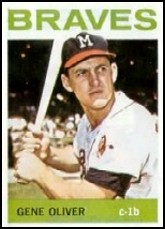 Gene Oliver played a decade in the majors and had his best years with the Milwaukee Braves in the mid 1960s.

Born in Moline, Illinois, Oliver went to Alleman High School in neighboring Rock Island. After graduation, he attended Northwestern University, where he received a football scholarship, but later turned to baseball, beginning his pro career in the St. Louis Cardinals organization in 1956.

Oliver started his career with a bang, winning home run titles in the 1956 Sooner State League with 39 and the 1957 Carolina League with 30 (tied with Bob Perry). He would later add another in the 1961 Pacific Coast League with 36.

Primarily a catcher (but also able to play first base and outfield), Oliver made his big league debut with the Cards in 1959. After seeing limited playing time in 1959 and 1961, he was the Cardinals' starting catcher in 1962, hitting .258 with 14 homers. One was hit on the final day of the season, in a game where the Cards beat the Los Angeles Dodgers, forcing the Dodgers into a three-game playoff with the San Francisco Giants (which the Giants ultimately won).

Midway through the 1963 season, Oliver was traded to the Milwaukee Braves, with whom he would see his best big league seasons. He hit 11 homers with the Braves in 1963 and 13 in 1964 before having his best season in the majors in 1965. That year, he hit .270 with 21 home runs and was one of six players on the club with more than 20 dingers (the others were Hank Aaron, Eddie Mathews, Joe Torre, Felipe Alou, and Mack Jones). Though he only hit .194 in 1966 (after his team had become the Atlanta Braves), he had the biggest day of his career. On July 30th, he went 4-for-4 with 7 RBIs in a win against the Giants. He also hit 3 homers in that game and became the first player to accomplish that feat in Fulton County Stadium.

In 1967, Oliver was traded to the Philadelphia Phillies for fellow catcher (and future broadcaster) Bob Uecker. After a stint with the Boston Red Sox in 1968, he ended his career with the Chicago Cubs in 1969. Although his playing time with the Cubs was limited (only 43 plate appearances in 1969), his leadership (and sense of humor) was viewed as valuable by teammates as the club made a pennant run.

During his career, Oliver hit .409 against Hall of Famer Sandy Koufax and is the only man to hit over .400 against him in more than 50 at bats.

After his playing days ended, Oliver spent time as a minor league coach and dabbled in politics briefly, working for the Illinois Secretary of State at one time. He died at age 71 following lung surgery. Although his career as a Cub was brief, his pallbearers included Randy Hundley and Glenn Beckert.