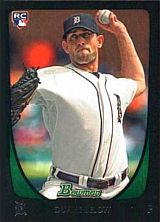 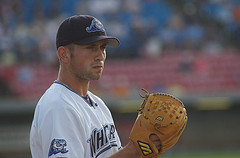 Pitcher Duane Below was selected by the Detroit Tigers in the 19th round of the 2006 amateur draft. He was signed by scout Tom Osowski and began his pro career with the GCL Tigers, going 2-0 with a 1.60 ERA in 15 outings before being promoted to the Oneonta Tigers for two late season starts. With the West Michigan Whitecaps in 2007, he went 13-5 with a 2.97 ERA, pacing the Midwest League in wins (tied with David Herndon and Rafael Gonzalez) and strikeouts (160). He was also 4th in the MWL in ERA. He averaged 9.89 strikeouts per 9 innings to finish second among the MWL's starting pitchers behind fellow southpaw Clayton Kershaw. He also won both of his starts in the postseason that year, recording 17 strikeouts in the process, and was named Tigers Minor League Pitcher of the Year and West Michigan's Pitcher of the Year. Below led all Detroit farmhands in both strikeouts and opponent average (.236). He failed to make the MWL All-Star team as Kershaw was the lefty chosen. Duane spent the following summer with the Lakeland Tigers and went 8-7 with a 4.46 ERA in 27 games, leading the Florida State League with 126 strikeouts. He was also third in the loop with 70 walks and tied Jonah Nickerson for the most starts (26). He again had the best strikeout rate of any of his league's starting pitchers and led all Tigers farmhands in walks while tying Jon Kibler and Lauren Gagnier for the most strikeouts. He split 2009 between Lakeland and the Erie Sea Wolves, going 2-4 with a 2.70 ERA and 45 strikeouts between the two clubs. With Erie again in 2010, he went 7-12 with a 4.93 ERA in 28 starts. He started 2011 much sharper in his AAA debut with the Toledo Mud Hens at 9-4, 3.13, punching his ticket to the majors to replace Adam Wilk. 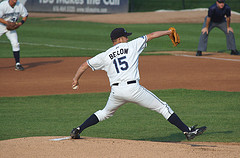 In his big league debut, July 20, 2011, Below turned in a solid outing in a starting assignment against the Oakland A's. He began by retiring Coco Crisp on a grounder, then retired the next five batters. In the third, he allowed three hits and a walk and threw a wild pitch; he was tagged for two unearned runs thanks to a Carlos Guillen error. With a 2-2 tie to open the 6th, he served up Hideki Matsui's 500th home run as a pro; it was the only earned run given up by the rookie hurler that day. He was yanked in favor of Lester Oliveros. Detroit wound up with a 7-5 loss and Below got a no-decision. He made 14 appearances for the Tigers until the end of the season, but only one more start, finishing 0-2, 4.34. He struck out 14 and walked 11 in 29 innings. Below made the Tigers' staff as a long reliever out of spring training in 2012. He made his first appearance April 7, when Doug Fister had to be removed from a start against the Boston Red Sox with a 5-0 lead in the 4th because of a rib injury. Duane pitched 2 1/3 scoreless innings to earn his first major league win. It took him barely 24 hours to earn win number 2. On April 8, he relieved Joaquin Benoit with two outs in the 11th inning after Benoit had given up a pair of runs. Below struck out Adrian Gonzalez after a long battle, then inherited the win when the Tigers staged an epic comeback with 3 runs in the bottom of the frame to prevail, 13-12. On the season, he made 27 appearances (1 start), with a 3.88 ERA and an 8/29 BB/K ratio in 46 1/3 innings. Following a disastrous start to the 2013 season (2 appearances, 3 earned runs in 2 2/3 innings), he was designated for assignment in April and claimed by the Miami Marlins.

Duane pitched well with Miami's Triple A outfit in New Orleans, but left for the potentially greener pastures of South Korea, catching on with the Kia Tigers of the KBO in August 2013 (3-2, a save, 4.02). He came back to the States for a return engagement in the Tigers organization, spending the entirety of the 2014 season with Triple A Toledo. He spent parts of two seasons in Triple A Las Vegas as a New York Mets farmhand in 2015 and 2016, with a one game cameo for the Yokohama DeNa BayStars of Nippon Pro Baseball. In one start in Japan, he allowed 5 earned runs in 1 1/3 innings, allowing only 2 hits but permitting 5 free passes. From 2017 to 2019, Duane was a regular component of the pitching staff for the Atlantic League's Somerset Patriots.