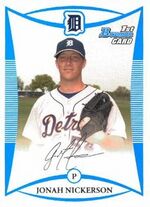 Jonah Nickerson was a pitcher who is most notable for winning the 2006 College World Series Most Outstanding Player award while a junior at Oregon State University. He is one of two players from Oregon State University to win that award. The other is Jorge Reyes. He was also an All-American in 2005 and 2006.

In 2006, he went 13-4 with a 2.24 ERA in 20 games started. For the first time in his collegiate career, he didn't average more than one strikeout per inning, striking out 131 batters in 136 2/3 innings. He tied Buck for the most wins in the Pac-10 and led the Conference in innings. He was second to Lincecum in ERA and made the All-Conference team. He also tied for third in NCAA Division I in victories, one behind Jake Arrieta and Lauren Gagnier and even with first-round picks Andrew Miller and Wes Roemer. Nickerson was named a second-team All-American by Baseball America. In the 2006 College World Series, Jonah went 2-0 with a 0.84 ERA, throwing 323 pitches in 8 days. He was named the Most Outstanding Player of that College World Series for his efforts in guiding Oregon State to its first title ever.

Nickerson was drafted by the Detroit Tigers in the seventh round of the 2006 amateur draft and was signed by scout Brian Reid. He began his professional career that year with the Oneonta Tigers, making five appearances. In 2007 with the West Michigan Whitecaps, he went 11-7 with a 4.24 ERA in 25 games. In 2008, he played for the Lakeland Flying Tigers, going 12-4 with a 3.99 ERA in 27 games. He tied Reidier Gonzalez and Dylan Owen for the Florida State League lead in victories. In 2009, his final season, he was 8-12 with a 5.33 ERA in 28 games (27 starts) for the Erie SeaWolves. He tied Ryne Lawson, Vance Worley and Ryan Pope for 4th in the Eastern League in losses, led in hits allowed (217, 36 more than #2 Michael Crotta), led in runs allowed (108, 6 more than Worley), led with 98 earned runs allowed (7 more than Worley), gave up the most homers (23, two more than Josh Tomlin) and led with 15 hit batsmen. He allowed the most hits in the affiliated minors (only Joe Gannon had more in the independent leagues or Mexico); Keith Weiser was second with a distant 195.

On July 7, 2006, Nickerson was given the keys to the city of Oregon City, OR and the mayor proclaimed July 7 to be "Jonah Nickerson Day." [1]