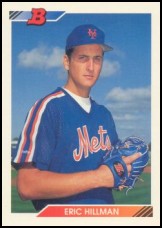 Hillman made it to AAA shortly before turning 25. He was 5-12 with a 4.01 ERA for a good Tidewater Tides team and was one loss behind International League leader Paul Marak. In 1992, Hillman was 9-2 with a 3.65 ERA for Tidewater and earned a trip to the majors, going 2-2 with a 5.33 for the 1992 Mets. He became the second 6' 10" player in baseball history, following Randy Johnson by under four years. A decade later, Jon Rauch surpassed Hillman and Johnson as the tallest player in MLB annals.

Bobby Valentine, the Norfolk manager, was hired to manage the 1995 Chiba Lotte Marines. He asked Hillman if he wanted to come along and Hillman took him up on it. While Eric had been tied for the tallest pitcher in MLB history, he may not have been the tallest in NPB history, as Shohei Baba is sometimes listed as 209 cm while Hillman was 208 cm tall (the official NPB encyclopedia only lists Baba at 200 cm). Hillman began his Chiba Lotte career with a 2-1 loss and a no-decision in which he left with a 2-1 lead. GM Tatsuro Hirooka promised to count the two fine efforts as a one-game credit towards the $100,000 incentive he would get for 12 wins. When Hillman was 11-9, Hirooka said he could not recall promising such an adjustment. Eric finished at 12-9 with a 2.87 ERA, fourth in the Pacific League. For a gaijin pitcher, it was a remarkable year. Hillman befriended Hideki Irabu and helped teach Eric Japanese.

Hillman did even better in 1996 (14-9, 2.40) even though he complained about changes when Valentine was removed as manager. He stopped going on road trips with the club when it was not his turn in the rotation. Hillman was picked for the PL All-Star team and raked the pitcher's mound in the fifth inning, having dressed up as a member of the grounds crew. He was fourth in the PL in wins, led in innings (213 1/3), hit the most batters (15) and had a 2.40 ERA, edged slightly by Irabu (also 2.40) in the ERA race. Hillman was named to the PL Best Nine as the pitcher. Joe Stanka in 1964 had been the only prior gaijin to be so honored.

Hillman became a free agent and inked a large deal with the Yomiuri Giants; he thinks he was the second-highest-paid player behind Kazuhiro Kiyohara. Eric tore his rotator cuff early in the year and went only 0-1, 3.00 in his two games there. The media in Japanese questioned his work ethic when he did not recuperate and return to action as fast as they felt he should. Overall, he was 26-19 with a 2.64 ERA in NPB, one of the top foreign pitchers of the decade.

Eric went to spring training with the Houston Astros in 2000 and pitched five shutouts innings for a win for the Round Rock Express in his only game, but his arm was trashed by then and he retired. His career minor league record was 54-39. As a pro baseball pitcher, his overall mark was 84-72.