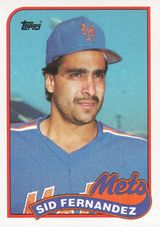 He was a two-time All Star in 1986 and 1987, also pitched on the division-winning Mets in 1988, and led the National League in winning percentage in 1989 when he went 14-5. A power pitcher, he was often in the top 3 in strikeouts per nine innings.

He had a terrific minor league career, going 32-11 in three years in the minors and capturing the Texas League Triple Crown (13 wins, 209 strikeouts, and a 2.28 ERA with the San Antonio Dodgers in 1983) before the Dodgers brought him up for the first time. With the Mets' minor league organization, he was 10-6 in two seasons before he became a regular. His career minor league ERA, counting rehab assignments, was 2.70. He pitched two minor-league no-hitters, and while he didn't pitch any major league no-hitters, he left a no-hit game in 1987 during the 6th inning because of a knee problem.

After losing his first game with the Philadelphia Phillies in 1995, he won six in a row.

He was a decent hitter for a pitcher, with a .182 lifetime average in the majors.

Sid wore #50 in honor of his home state and his favorite television program, "Hawaii Five-0." He was discovered by Hawaiian scout Iron Maehara. His weight was often a subject of comment.