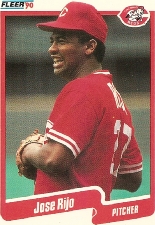 The New York Yankees' answer to New York Mets teen phenom Dwight Gooden, 18-year-old pitcher Jose Rijo made his debut with the Yankees in 1984. He struggled somewhat and after the season was traded to the Oakland Athletics with four other players for Rickey Henderson. In 1985, with AAA Tacoma, he led the Pacific Coast League with 108 walks and 179 strikeouts while posting a 2.90 ERA in 149 innings. He showed moments of brilliance with Oakland, but was traded to the Cincinnati Reds, along with Tim Birtsas who had also been part of the Henderson trade, for Dave Parker after the 1987 season.

In eight seasons with the Reds, he became a mainstay in their rotation, winning 15 games twice. In the 1990 World Series, he started and won two games to help lead the Reds to the title over his former Oakland teammates and was named World Series MVP. By the mid-1990s, he struggled with arm problems and his career appeared to be over. However, he made a successful comeback, returning to the Reds in 2001, six years after his last big league appearance. That season, he had a 2.12 ERA in 13 appearances, and in 2002, he went 5-4 in 31 games, including 9 starts.

Rijo's comeback in 2001 was notable because it came months after he received a vote for the Hall of Fame.

He is the son-in-law of Juan Marichal

Rijo was working in the Washington Nationals front office before losing his job in early 2009 over the Esmailyn Gonzalez scandal. He found more legal trouble in the summer of 2012, when a prosecutor in the Dominican Republic charged him with having laundered money for a suspected drug trafficker; the prosecutor explained that he had found that 80% of the suspect's assets were registered in Rijo's name.