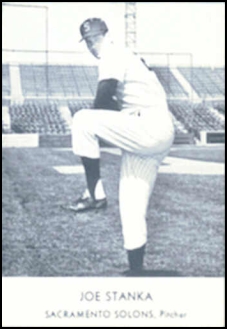 In the Brooklyn system[edit]

Joe Stanka signed with the Brooklyn Dodgers in 1950. After an inauspicious 2-11 rookie season in professional ball, he improved to 16-5 with a 2.53 ERA for the 1951 Ponca City Dodgers. He tied for third in the Kansas-Oklahoma-Missouri League in victories and was approximately third in ERA. He fell to 7-11 with a 4.65 ERA when moving up to the Western League's Pueblo Dodgers the next season.

Stanka was acquired by the Chicago Cubs in 1952 through the minor league draft. He spent the 1953 season in their organization with three teams, going 13-11. The bulk of the year was in the Three-I League for the Cedar Rapids Indians, where he had a 12-8 record and a 2.35 earned run average, the best mark in the circuit. He moved up to the South Atlantic League in 1954 and had his third very good minor league season in four years when he won 16 contests and lost only 5. His ERA was 2.99 for the Macon Peaches and he was 4th in the SAL in victories. In 1955 he returned to the Western League, now with the Des Moines Bruins and went 17-9 with a 3.43 ERA. He was fourth in the WL in complete games (17), tied for third with 3 shutouts, won the most games and struck out 148 (second-most). In his last five minor league seasons he had gone 69-41 and led his loops in both wins and ERA, but had yet to move beyond class A for more than a few games.

Sacramento sold him to the Chicago White Sox late in the 1959 season. Stanka finally made his major league debut that year, going 1-0 with a 3.38 ERA in 2 games and escaping from the Sacramento stay that had caused a promising career to go stagnant.

Stanka had his best year in 1964, as he posted a 26-7 record with a 2.40 ERA in 47 games. As a result Stanka became the first American pitcher of non-Japanese descent to win an MVP award in NPB. His six shutouts led the league, he was second to reliever Yoshiro Tsumajima (2.15) among the ERA leaders and was four wins behind PL leader Masaaki Koyama. Despite winning the MVP award, he lost the Sawamura Award to the only American to win it as of 2005, Gene Bacque of the Central League Hanshin Tigers. Stanka also was the MVP of the 1964 Japan Series. After shutting out Hanshin in the opener and beating Minoru Murayama by a 2-0 score, he dropped Game 3, 5-4, to Midori Ishikawa. In Game 6, with the Hawks on the ropes and trailing three games to two, Joe came back to beat Bacque 4-0 with his second shutout. When Nankai skipper Kazuto Tsuruoka asked him if he would be willing to work Game 7 the next day, Stanka agreed. Despite his fatigue, he threw nothing but goose eggs again, with a 3-0 shutout win over Murayama. He had gone 3-1 with a 1.23 ERA and 0.65 WHIP in the Series.

After retiring, he worked for an insurance company in Houston, TX.