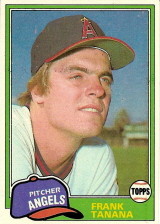 Once labeled California's most-eligible-bachelor while a high-spirited, fun-loving young lefty sensation, Frank Tanana credits the death of murdered teammate Lyman Bostock with helping put his life and career in a more proper, balanced perspective. A very religious man, Tanana is not afraid to convey his reverence for God and often refers to John 14:6. He started out his career as a fireballer. After arm problems, he became a finesse pitcher.

Tanana accumulated 240 wins during his career, with a career-high of 19 wins in 1976. He was the starting pitcher in the first game ever played in both the Kingdome and New Comiskey Park, throwing shutouts in both games. He won at least 10 games in seven of his eight seasons with the Detroit Tigers and is still active at the annual Tiger fantasy camps in Lakeland, FL. He started the last game ever played at Baltimore's Memorial Stadium, winning 4-1. He faced Minnie Minoso in both 1976 and 1980. Tanana and Rick Reuschel are the only pitchers to have given up home runs to both Hank Aaron and Barry Bonds.

His father Frank Richard Tanana was a minor league outfielder in the Cleveland Indians chain.