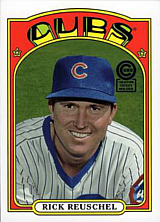 Pitcher Rick Reuschel played 19 seasons in the majors, winning 214 games. Aside from being a three-time All-Star on the mound, he was an excellent fielder, winning a pair of Gold Gloves. His athletic abilities were also such that his managers also used him as a pinch hitter and a pinch runner despite an apparently ungainly build (he weighed over 230 pounds for most of his career).

The younger brother of Paul Reuschel, Rick attended Western Illinois University and was selected by the Chicago Cubs in the third round of the 1970 amateur draft. He made his pro debut that summer with the Huron Cubs, going 9-2 with a 3.53 ERA and 7 complete games in 14 starts. The following year, 1971, with the San Antonio Missions, he posted a 8-4 mark and a 2.31 ERA while going the distance in 9 of his 16 starts (including a pair of shutouts). He made a dozen starts for the Wichita Aeros in 1972 and went 9-2 with a 1.32 ERA, 8 complete games, and 3 shutouts before being promoted to the majors in June. 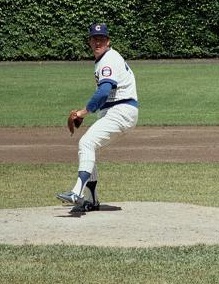 Reuschel made his big league debut for Chicago against the San Francisco Giants on June 19th, 1972, coming out of the bullpen in the 4th inning and retiring Bobby Bonds, the only batter he faced. A week later, facing the Philadelphia Phillies, he made his first start and earned a win in a six-hit complete game. Overall that summer, he went 10-8 with a 2.93 ERA and 4 shutouts in 21 outings and made the Baseball Digest Rookie All-Star Team.

Reuschel continued to be a mainstay of the Cubs' rotation over the next several years and was joined on the team's pitching staff by brother Paul in 1975. On August 21st of that year, Paul relieved Rick in the 7th inning of a game against the Los Angeles Dodgers at Wrigley Field, and the two combined to throw a shutout, becoming the first pair of brothers to accomplish the feat in MLB history. However, Rick lost 17 games that year to lead the National League despite posting a respectable 3.73 ERA. In 1977, Reuschel put together his finest year to that point, winning 20 games and recording a 2.79 ERA while throwing 4 shutouts for a .500 Cubs team. He played in the first All-Star Game that summer while finishing third in Cy Young Award voting. He remained a durable member of the Chicago pitching staff over the next three seasons, starting at least 35 games in each year.

At the beginning of the 1981 strike, Reuschel was traded to the New York Yankees. After the season resumed, he won 4 games for New York, who reached the postseason as the result of their first-half division win. He made a start and took the loss in Game 4 of the ALDS against the Milwaukee Brewers and made two appearances in the World Series against the Dodgers.

Reuschel underwent rotator cuff surgery and missed the entire 1982 campaign. He came back the following year, but he struggled in 4 outings for the AAA Columbus Clippers and was let go by the Yankees. The Cubs soon re-signed him, and after a stint with the Quad Cities Cubs, he made 4 September starts for Chicago. In 1984, he went 5-5 with an ERA of 5.17 but was left off the team's postseason roster, and became a free agent after the season.

Despite being considered over-the-hill, the 35-year-old Reuschel was signed by the Pittsburgh Pirates prior to the 1985 season. After going 6-2 with a 2.50 ERA and 46 strikeouts in 8 starts for the AAA Hawaii Islanders, he was back in the majors. He won 7 of his first 8 decisions for the Bucs and ended the year with a 14-8 record and a 2.27 ERA. After the season, he won a Gold Glove and was recipient of the NL Comeback Player of the Year Award.

After again pitching in the All-Star Game in the 1987, Reuschel was dealt to the San Francisco Giants for Scott Medvin and Jeff Robinson. He went 5-3 down the stretch for the Giants to end the year with an overall 13-9 mark while leading the NL with 12 complete games and 4 shutouts. He won another Gold Glove that year and once again finished third in Cy Young Award balloting. He also made a pair of starts for San Francisco in the NLCS as they fell to the St. Louis Cardinals. Reuschel won 19 games for the Giants in 1988, and the following year, he won 17 and was the NL starter in the All-Star Game. He made a pair of starts in the 1989 NLCS against his former team, the Cubs, and took a loss in Game 2 of that fall's World Series against the Oakland Athletics. He pitched two more years for San Francisco before ending his career at age 41.