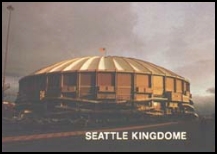 The Kingdome was the second domed stadium used in Major League Baseball, after Houston's Astrodome. It was designed to prevent the rainouts that would have occurred playing outdoors in Seattle.

Contrary to the Astrodome, the Kingdome was very favorable to hitters. The enclosed air-conditioned space did away with the deadening effect of Seattle's lack of altitude and humid air coming off Puget Sound. The stadium was also home to the Seattle Seahawks of the NFL, who started play six months before their fellow expansion team, the Seattle Mariners of the American League. The stadium hosted the 1979 All-Star Game, 1977 NFL Pro Bowl and 1987 NBA All Star Game, making it the only stadium to host 3 major professional All Star Games.

On July 19, 1994, the stadium became temporarily inaccessible when four acoustic ceiling tiles tumbled into the stands two and half hours before a Mariners home game. No one was injured, but the Mariners were forced to play all their remaining games on the road until August 11, when the remainder of the season was cancelled by the 1994 strike. For their part, the Seahawks had to relocate to the University of Washington's football stadium for a few games in the '94 season.

After the construction of Safeco Field, the Kingdome was demolished in one of the largest and most spectacular controlled implosions ever, on March 26, 2000.