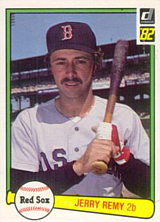 Jerry Remy had a ten-year career in the major leagues as a second baseman and later became a television broadcaster. As a ballplayer, he hit .275 in 4,455 lifetime at-bats with the California Angels and Boston Red Sox with virtually no home run power (only 7 in his entire career) but with 208 stolen bases.

Traded to the Red Sox after the 1977 season, he became an All-Star in 1978. He spent the rest of his career with them, hitting over .300 in 63 games in 1980 and also in 88 games during the strike-shortened 1981 season. He finished 10th in the AL with a .307 batting average that year. Knee problems caused him to miss some time in several seasons.

He took over for announcer Bob Montgomery as Red Sox color man in the late 1980s and has worked for for TV38, NESN and FOX. Remy, whose long-time announcing partner was Don Orsillo, is known for his humorous style and his friend in the booth Wally the Green Monster (a small figurine representing the Sox's mascot is always installed near him in the broadcast booth). He missed the beginning of the 2009 season while undergoing treatment for cancer but came back to the booth in mid-year. He suffered a relapse in the winter of 2013, but only missed a very brief period in spring training when he underwent radiation therapy. More personal bad news came later that year when his son Jared was arraigned in Waltham, MA on August 16th on charges of fatally stabbing his girlfriend the previous day. Jared had a long history of criminal violence, including many charges of violence against other women. Remy took another break from the broadcast booth following the tragic events. Jared pleaded guilty to first-degree murder the following May and was sentenced to life without parole.

Orsillo was let go by the Red Sox after the 2015 season, but Remy remained on board, partnering with former radio broadcaster Dave O'Brien. In February 2017, he announced that he had suffered another relapse of the lung cancer, but that it was under control and that he was not expecting to miss time as he prepared for his 30th season as an announcer. He stoked some controversy during a broadcast of a Red Sox game against the New York Yankees on June 6th that year, as he objected to the presence of a translator for Japanese pitcher Masahiro Tanaka during a mound visit, saying the hurler should "learn baseball language". His partner in the booth, O'Brien, tried to have him retract his words, but he persisted. His remarks were particularly ill-advised given MLB had made efforts in recent years to ensure that foreign-born players, including Latino players, had access to proper linguistic resources in order to help them perform, and that it had adopted a rule in 2013 specifically allowing the presence of an interpreter during a mound visit. He was roundly criticized from many quarters, particularly on social media and both the Red Sox and NESN issued statements distancing themselves from his words. The following day, he issued an on-air apology. Shortly after that incident, he announced another relapse of the cancer that would force him to undergo surgery at the end of June. He completed cancer treatments in January 2018, but announced the following August that he had had another relapse.

He continued to fight on for a couple more years and made his final public appearance in early October of 2021, when he threw the ceremonial first pitch at the 2021 American League Wild Card Game, which the Red Sox won against the New York Yankees. He had had to take a leave of absence from broadcasting that August because of another relapse of the disease. He passed away less than a month later, on October 30th, at age 68. The Red Sox wore a patch on their sleeves with his name and his number, 2, in commemoration during the 2022 season.

Remy was inducted into the Boston Red Sox Hall of Fame in 2006 and elected Honorary President of Red Sox Nation in 2007.