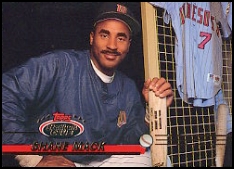 Shane Mack was signed as a 1st round pick in the 1984 amateur draft by the San Diego Padres and scout John Young.

Mack had a nine-year major league career with a lifetime batting average of .299. He was one of the best-ever UCLA baseball players, a member of the 1984 Olympics squad, a member of the 1991 World Series champion Minnesota Twins, and also played for the Yomiuri Giants in Japan before coming back and finishing out his career in the USA.

When he was a big star at UCLA in 1984, across town at rival USC the star was Mark McGwire. There was speculation as to which one would be picked #1 in the draft, but the New York Mets took Shawn Abner instead of either of them, and Abner was a big bust.

Based on similarity scores, one of the most similar players to Mack is Pete Reiser.

One website ranks him # 24 all time among Twins players. His brother Quinn Mack also played in the majors.