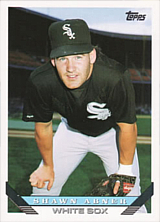 Shawn Abner was selected by the New York Mets as the first overall pick in the 1984 amateur draft. Some consider him one of the biggest draft busts of all-time. Never taking the field with the Mets, Abner was an intriguing piece added to the Kevin McReynolds for Kevin Mitchell deal between the Mets and the San Diego Padres following the 1986 season. His quirkiness and inability to hit big league pitching regularly led to his becoming a platoon and eventual bench player, playing his final big league game at the age of 26 as a spare part with the Chicago White Sox. Abner primarily wore number 28 during his career.

Shawn's brother, Ben Abner, was also drafted in 1984, by the Montreal Expos, and played in the Expos and Pittsburgh Pirates chains. A son, Seth, later became a professional Call of Duty video game player, going by the nickname "Scump".