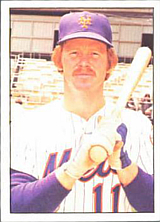 The younger brother of Adrian Garrett and Jimmy Garrett and uncle of Jason Garrett, Wayne Garrett's major league career spanned ten years from 1969 to 1978. His best seasons came with the New York Mets.

As a 21-year-old rookie, Wayne was a member of the 1969 World Champion Miracle Mets. Early in the 1969 season, with veteran third baseman Ed Charles already tiring, Garrett was approached by Met Manager Gil Hodges. "Hodges came up to me and asked if I had ever played third base. I said 'Yeah' and he said, 'Well, you're playing third base. You're in the game right now." For the remainder of the 'season, Garrett platooned with Charles at third base; Wayne faced the righties and Charles faced the lefties.

In the National League Championship Series against the Atlanta Braves, Wayne played flawlessly at third base, while batting .385, slugging .769 and hitting a two-run homer off Pat Jarvis in Game 3 in front of 53,195 Shea Stadium fans to launch the Mets into a World Series showdown with the Baltimore Orioles. Ironically, Jarvis was a former roommate of Wayne's older brother Adrian.

In June of 1970, Wayne put together the finest one-month performances of his career. He batted .429, had a slugging percentage of .776, an on base percentage of .576 and an OPS of 1.352. He missed half of the 1971 season due to military service obligations in the Army Reserve.

Wayne also had an exceptional month of September in 1973, helping the Mets in their drive to win the National League Pennant. His totals for the month? A batting average of .315, slugging percentage of .598, an on base percentage of .407, an OPS of 1.005, 6 home runs and 17 RBI. On September 7th, Wayne did something only 7 other National Leaguers had previously ever done. In the first game of a doubleheader against the Montreal Expos, Wayne hit lead-off for the visiting Mets who sent Jon Matlack to the mound opposite Steve Renko. Leading off the game, Wayne hit a home run, which proved to be the only score for the entire game as the Mets won the game, 1-0. For the entire 1973 season, Wayne hit 16 home runs for the Mets, finishing second on the team behind John Milner in this category. Wayne showed good power while in the majors with an OPS+ greater than 100 for all or parts of 6 seasons.

Wayne was the Mets starting third baseman from 1972 through 1975. He also saw action at second base and some time at shortstop. His lifetime fielding percentages are above average at all three positions, showing his versatility and dependability. The 1973 Mets won the NL East and then defeated the Cincinnati Reds in the National League Championship Series, three games to two. This series was highlighted by an on-field brawl that included Pete Rose, Bud Harrelson and Wayne. The Mets were defeated in the World Series by the Oakland A's. Wayne played third base and hit 2 home runs in the Mets' losing cause.

On July 21, 1976, Wayne was traded, along with Del Unser, to the Montreal Expos for Jim Dwyer and Pepe Mangual. He was mainly a backup in Montreal, at second base in 1976, and third base, sharing playing time with Larry Parrish, in 1977 and 1978. He was also frequently used as a pinch-hitter. Two years to the day after the trade, Wayne's contract was purchased by the St. Louis Cardinals. Wayne finished out the 1978 season with the Cardinals before moving on to Japan for two years (1979 and 1980).

In Japan, Wayne played second and third base for the Chunichi Dragons. During his two years with the Dragons, Wayne hit .241, had an on-base percentage of .327 and a slugging percentage of .427. In 1989, playing for the Bradenton Explorers of the Senior Professional Baseball Association, Wayne hit .246 in 26 games. The Explorers were managed by an old nemesis from the 1969 Championship Series, Clete Boyer.

Wayne's oldest brother Adrian was originally signed by the Milwaukee Braves and saw action in the bigs with the Braves, Chicago Cubs, Oakland Athletics and California Angels. Adrian played in Japan for the Hiroshima Carp from 1977 through 1979, hitting 102 home run in 3 seasons. The Carp won the 1979 Nippon Series against Charlie Manuel and the Kintetsu Buffaloes.

"The surprise of the year." Gil Hodges, former New York Mets Manager, on Wayne's contributions to the Mets in 1969 with no prior Major League experience

"A year ago at this time, Garrett was just getting started in the Arizona Instructional League..." Jack Lang, The Sporting News commenting on how Wayne went from the minors in 1968 to being a part of the World Champion Mets in 1969.

"I think that kid Garrett is going to make a heck of a third baseman." Johnny Murphy, former Mets General Manager and six-time World Series winner with the New York Yankees

"Garrett's slugging this year has everyone shocked." Jack Lang, The Sporting News, commenting on Wayne's power surge from 1969 to 1970 (12 homers vs 1 homer)

"You talk about timing, I was there." Wayne talking about being being on the World Champion Mets during his rookie year

"Being in the right place at the right time and having the right people see you and having them like you. That's the way life is." Wayne talking about the New York Mets taking a chance on him due to Bud Harrelson having knee surgery.

"There's a lot better teams that have won World Series... but ours was remembered." Wayne reminiscing about 1969's Miracle Mets.