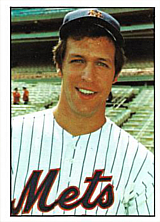 Jon Matlack was part of the great New York Mets pitching staff of the early 1970s. After winning the National League Rookie of the Year Award in 1972, Matlack turned in a good major league career but never lived up to lofty expectations. He set a single-season record for Mets left-handed pitchers in 1973 with 205 strikeouts. Matlack pitched a two-hit shutout over the Cincinnati Reds in Game 2 of the 1973 NLCS, then was the winning pitcher in Game 4 of the 1973 World Series.

Traded to the Texas Rangers before the 1978 season, Matlack was used out of the bullpen by the end of his career in 1983. He never won more than 17 games and actually had a losing lifetime record of 125-126.

In 1989, he played for the St. Petersburg Pelicans of the Senior Professional Baseball Association. He went 10-2 in 15 starts for the club. Matlack was featured in Peter Golenbock's book on the lone SPBA season, The Forever Boys.