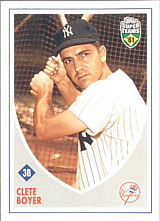 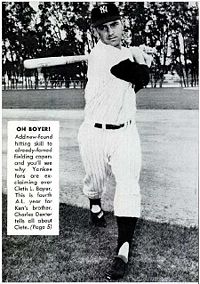 “I came up too late for Joe Dugan... but I have seen everybody who played third base for this club since 1932, and this man is the best. What can’t he do? He has tremendous arm power. He not only throws hard when he is down, but he throws strikes to first base.” - Frankie Crosetti, to The Sporting News, November 15, 1961

"When I think of Clete, I think of the outstanding defensive third basemen in baseball... I know Brooks Robinson got all the Gold Gloves, and he's every bit deserving of the Hall of Fame, but Clete was as good as anyone who ever played the game." - Bobby Richardson

Clete Boyer was an excellent defensive third baseman during a 16-year major league career. He appeared in five World Series in a row, from 1960 to 1964, with the New York Yankees. In the first game of the 1962 World Series he batted eighth in the lineup and hit a home run to help Whitey Ford get the win. In the 1964 World Series, both he and his brother Ken hit home runs in the seventh game, which Ken's St. Louis Cardinals won.

Clete was a rookie on the 1955 Kansas City Athletics, a team on which 39-year-old Enos Slaughter hit .322. Clete was first signed as a bonus baby by the Kansas City Athletics, then traded to the Yankees right after completing his requirement for spending time on a major league roster as a result of the bonus rule in effect at the time. Other teams howled at the deal, claiming the Yankees used Kansas City as a farm team to avoid having to keep Boyer on their roster before he was ready to contribute. Clete played for eight years with the Yankees, alongside players such as Mickey Mantle, Roger Maris, Whitey Ford, and Yogi Berra, who was to become his manager in 1964. Had Brooks Robinson not called the AL home at this time, it is quite possible Clete would have received more accolades for his gifted glovework during his time in pinstripes. He ended his career playing five years for the Atlanta Braves, alongside Hank Aaron and Tommie Aaron. In 1967, Clete's 26 home runs and 96 RBI were second on the team behind Hank. He appeared in the 1969 Championship Series against the New York Mets and won his only Gold Glove for fielding after switching to the National League, no longer in Brooks Robinson's shadow.

Following a stormy relationship with Braves' management and eventually being released, Boyer played in Japan for the Taiyo Whales from 1972 to 1975. He showed the same abilities as in the US - great defense (two Gold Gloves), some power (14 to 20 homers each year) and a mediocre average and OBP (.257/.300). When the 38-year-old infielder asked for a day off every three games in his last year, the owner expressed anger. As Boyer was being paid $800,000 a year, he felt fans would react poorly to this move. Instead, the owner and trainer had Boyer increase his workouts and provided him with so many vitamin injections that his arms were black and blue. Boyer went along with their regimen and retired after the season. He was one of the more popular foreign players in Japan due to his willingness to follow Japanese training approaches and culture.

Clete was the brother of Cloyd and Ken Boyer. Four other siblings, brothers Wayne, Lynn, Len and Ron played minor league ball as did Clete's son, Mickey, and Ken's son, Dave. Clete was the second-best of the set, having a similar skill set as Ken, but was not as good a contact hitter or slugger. However, Clete's major league career lasted longer - both Clete and Ken broke in during the 1955 season, but Ken was done in 1969 while Clete lasted to 1971 (plus his time in Japan).

After his playing days, Boyer was a coach for the Greenwood Braves in 1978, an Oakland Athletics coach from 1980 to 1985, coach for the Columbus Clippers in 1987 and a member of the New York Yankees staff in 1988 and again from 1992 to 1994. He also spent two more years with Columbus in 1990-1991. In 1989, he became manager of the Bradenton Explorers of the Senior Professional Baseball Association; the team moved to become the Daytona Beach Explorers in 1990 and he managed the team until the league ceased operations in December.

On June 4, 2007, Boyer died from complications following a brain hemorrhage. He was cremated and his ashes placed in a New York Yankees urn.

Sources include You Gotta Have Wa by Robert Whiting