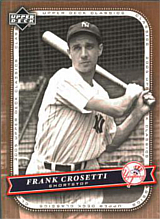 “Crosetti is the sparkplug of the Yankees... Without him they wouldn’t have a chance. He is a great player and he is about the only one on the club who does any hollering.” - Rogers Hornsby, to the New York World-Telegram, May 21, 1936

Frankie Crosetti was a slick-fielding infielder known for his glove and accumulating records, most notably seventeen World Series rings. Or what would have been seventeen - seven as a player and ten as a coach - if the New York Yankees did not start giving him engraved shotguns instead. Frankie holds the Yankee record for service, as a player from 1932 to 1948 (he was a player-coach in 1947) and as third base coach from 1949 to 1968. In all, "Crow" - whose nickname probably had as much to do with him being the Yankees' "holler guy" with his high-pitched, shrill voice than an abbreviation of his surname - was on the field in a record 23 World Series. He also coached the Seattle Pilots and Minnesota Twins before retiring in 1971.

Crosetti, mostly a shortstop, was not a strong hitter, although he had some power and drew walks well. His claim to fame was the number of times he led the league in hit-by-pitches - eight, including five consecutive seasons (1936-1940), a streak broken only when his playing time was reduced in 1941 because of the rise of Phil Rizzuto. He was so proficient at it he actually led the AL in 1942 by being plunked nine times in just 74 games. Additionally, he was in the AL top 10 in stolen bases four times, leading the league in 1938 with 27. He also struck out a lot, pacing the junior circuit twice in strikeouts.

Crosetti was a master of the hidden-ball trick, which he pulled on players including Al Brancato and Augie Galan, often in spring training. His glove was also responsible for brilliant defense in the 1938 World Series, which included three game-saving plays in Game 1. His home run off an aging Dizzy Dean drew him (unofficial) votes from several writers for series "hero" (in the days before the creation of the World Series MVP award) in the Yankees' sweep of the Chicago Cubs.

Crosetti was suspended for the first month of the 1943 season after an altercation with umpire Bill Summers in the 1942 World Series, but after his return to the starting lineup in June, the Yankees coasted to the pennant (and ultimately a World Series championship). In 1944, when he did not join the Yankees until July 19th because of his war job, many believed that his reappearance would again spur the Yankees to another title. In fact, some fans even wrote to Commissioner Kenesaw Mountain Landis about how what an unfair advantage the Yankees had in being able to cull such an individual away from Uncle Sam. Nevertheless, the team ultimately fell short that year.

In 2004, two years after his passing, Crow was elected to the Pacific Coast League Hall of Fame. He played four seasons for the San Francisco Seals, hitting .320. The Yankees purchased him in the fall of 1930 after a terrific .334 batting average and .542 slugging percentage in 189 games for the hefty Depression-era sum of $75,000, but they allowed him to stay with the Seals in 1931 for seasoning before inviting him to spring training in 1932. As the last surviving Yankee in uniform for Babe Ruth's famous "called shot" home run in the 1932 World Series, Crosetti adamantly insisted that the Bambino did not point.