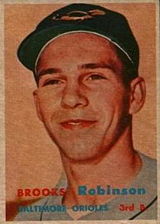 Inducted into Hall of Fame in 1983 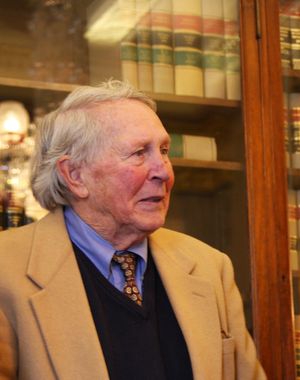 "I played almost 23 years professionally and I don't think I ever had five games in a row like I had in that World Series. It just happened to be the World Series." - Brooks Robinson on his performance in the 1970 World Series

Considered by many the best defensive third baseman of all-time, Brooks Robinson is the record holder for an infielder with sixteen consecutive Gold Gloves, a total equaled only by pitchers Jim Kaat (16) and Greg Maddux (18). He was named to the Rawlings All-Time Gold Glove Team. He was nicknamed "The Human Vacuum Cleaner" after stellar defensive performance in the 1970 World Series against the Cincinnati Reds. He also is tied with Carl Yastrzemski for the most seasons with the same team (23).

After his playing career ended, Robinson was an Orioles broadcaster. Robinson was elected to the Baseball Hall of Fame on January 12, 1983 by the Baseball Writers Association of America. He was an inaugural inductee of the Baltimore Orioles Hall of Fame in 1977 and had his #5 retired on April 5, 1978. In 2012, his statue was erected outside Oriole Park at Camden Yards along with those of other greats in the team's history. Also in 2012, he suffered a bad fall when attending a charity event at the Seminole Hard Rock Hotel and Casino in Hollywood, FL. He fell off a 12-foot stage that had no proper guardrail at the back, injuring his head, back and shoulders. Unable to obtain a proper settlement from the Seminole Indian tribe, he threatened in 2014 to sue for $9.9 million over his injuries. At dispute was an agreement between the tribe and the state of Florida that limits the tribe's liability to $200,000.

Brooks is considered one of the classiest ballplayers to ever step on a diamond. His first Baseball Card appearance was in the 1957 Topps set.

"If (Robinson) could run, he would be the perfect ballplayer." Johnny Pesky.