Topps is the most popular maker of baseball cards. The company can trace its roots back to 1890. The Topps name goes back to 1938. Based in Brooklyn, NY, the company produced various collectible products, before getting into the baseball card market in the early 1950s. These were the days of the post World War II baby boom, and Topps got in on the ground floor as those young children became consumers as they hit their pre-teen years, spending their weekly allowance or other income on various trinkets.

In 1951, the Topps company produced their first baseball trading cards. They produced two sets of 52 cards, one with red backs and one with blue backs. The cards were meant to play a simulated baseball game. They came with a piece of taffy, which was said to take on the taste of the card's protective coating, thus becoming unpalatable. These cards were relatively unpopular and were not produced again.

The following year, 1952, Topps produced a more popular set. The set was on a thicker stock and featured 407 player cards over three series. These cards were larger than the 1951 cards at 2 5/8" by 3 5/8". The cards featured realistic drawings of the players. The most valuable card Topps has ever produced was in the 1952 set, #311, featured Mickey Mantle. A copy of that card was sold in 2018 for $2.88 million, the second-highest price ever paid for a baseball card. It was in this set also that Topps introduced the familiar piece of pink hard chewing gum as the treat accompanying the cards.

Typically, the sets were issued in series at different times of the season; the lower numbers would be released earlier and in greater numbers, as they would not be withdrawn when the next series was released. The later series would become more valuable as they were on the market for a shorter period and, as result, were bought in smaller numbers. Mantle's card was part of the series which had a shorter sales run; in this case, it was a much smaller print run, given Topps was still establishing its business model. Rumors have circulated that thousands of cases of 1952 Topps cards went unsold and were dumped into the Atlantic Ocean to clear warehouse space for 1953.

Most of the early buyers were kids whose objective was not necessarily to keep the cards in pristine condition for future re-sale, but to "trade, play or flip" them, thus ensuring that they would become well-worn, or thrown away. As the cliché goes, when the now-grown teenager moved out of the house, his mother would throw away his childhood possessions, including the shoe box in which he kept his cards. Topps played on this cliché for its 60th anniversary in its 2011 set, introducing a series of commemorative cards reproducing its old designs which it called: "the cards your mother threw away". It would be a few years before adult collectors appeared on the market in significant numbers, but the initial 1952 set had already become singularly valuable by then.

Cards have also gained extra value for being the first appearance on any card for a player. Collectors have tended to assign extra value to these "rookie cards", for reasons that are not entirely rational.

Between 1952 and 1955, Topps was in direct competition with Bowman, which issued its own card set each year. The two rivals competed for the exclusive right to sign players, with the battles sometimes being decided in court. This explains why some very famous players are missing from these early Topps sets, but obscure "cup of coffee" players are featured many times, as are some coaches. Some players who had cards in the 1952 set did not appear again on Topps cards until 1956, the year after Topps bought out Bowman and put out a complete set thanks to its new monopoly position on the market. One of the most famous of these missing players is Stan Musial, who did not appear on a Topps card until 1958 in spite of being one of the major leagues' biggest stars at the time. 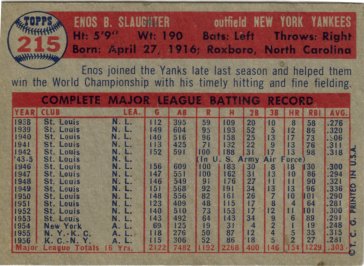 In 1957, Topps reduced the size of their cards by an eighth of an inch. The 2 1/2" by 3 1/2" size has become standard for baseball cards. This was also the first time career statistics appeared on the backs of Topps cards (prior to this, only statistics from the player's last season, coupled with career totals, were featured). Other features on the backs of cards, in addition to a short biographical blurb and the player's vital statistics, are cartoons. The first year those appeared, in 1953, they served to illustrate baseball question and answers (e.g. "What was home plate made of originally?") In 1954 they were three-panel mini morality tales explaining how the player featured conquered adversity to become a major leaguer, drawn in realistic style. The following year, the cartoons became more humorous, illustrating baseball sayings and historical oddities, and this became the standard. One of the more typical cartoon in later years featured the player's off-season job or pastime, illustrated for example by a baseball player teaching a biology class or scuba diving while in uniform.

Since 1959, Topps has selected a Topps All-Star Rookie Team. The honorees are typically depicted with a golden trophy on the front of their card in the following year's set.

One of the interesting innovations made by Topps, which is now taken for granted and has largely been imitated, is varying the designs of its card fronts from year to year (except for the 1952 and 1953 sets, which are almost identical) and giving them an instantly recognizable identity. These variations include the style of card borders, the fonts used, the use of player signatures on the card fronts certain years, the use of team logos or pictographs to depict a player's position, the use of color patterns to distinguish one team from another, etc. Topps has also issued whole sets whose pictures were horizontal and not vertical, and sets which feature both (the pioneer 1952 set did this, incidentally). Topps originally used colorized photographs against a drawn background; smaller black-and-white or colorized action pictures were added in 1954, contrasting with a large head shot, and full-color posed pictures appeared in 1957. Action photos began to be used in the early 1970s, first as additional "in action" cards in the 1972 set, and then as regular cards for certain players the following year. By varying all of these elements, Topps managed to create yearly sets that were visually distinctive. Collectors can thus know the year a card was issued with only one glance at its front. Most of these innovations can be attributed to one man, chief designer Sy Berger, who revolutionized baseball card design.

In addition to player cards, Topps sets over the years have featured league leader cards, cards that recap the previous year's postseason series, additional cards for All-Star players, cards that commemorate all-time leaders or records that have been broken. Team pictures and checklist cards were first introduced in the 1956 set. Other special cards feature major league brothers or fathers and sons, pictures of current players as youngsters, promising rookies grouped in sets of two, three or four on a single card, and oddities such as the 1976 card that proclaims Kurt Bevacqua baseball's bubble gum blowing champion.

From the purchase of the Bowman brand in 1956 until 1980, Topps produced the only regular set of cards save the 1963 Fleer and 1976 SSPC sets (the SSPC set had copy on the backs written by Keith Olbermann). Their popularity waned in the early 1990s however with the emergence of Upper Deck. In 1992, Topps dropped gum from its regular series cards. With the proliferation of special collectors' sets and other limited edition cards, Topps managed to survive and to regain popularity because its basic set, which has avoided most of the trends and gimmicks introduced by competitors, provides a direct link to six decades of history. Almost all of the classic designs used by "retro" sets introduced in recent years hearken back to designs introduced in older Topps sets.

Topps continues to produce several sets of cards for many sports but in 2021, it lost its licence to produce baseball cards, with the Players Association announcing it would not renew its license to use player names and pictures after it expires in 2022, and MLB that it would not allow it to use team logos after 2025. The two entities decided to instead enter into a deal with Fanatics, a company specializing in sports collectibles but that had not been in the trading card market until then, in exchange for a stake in the company. The move cast the future of the company into doubt. In January of 2022, things became clearer when news emerged that Fanatics was buying Topps for an estimated $500 million, thus acquiring the technical expertise in making and marketing trding cards that it was lacking.