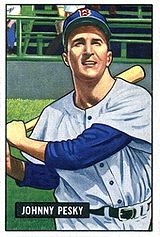 Iconic Boston infielder Johnny Pesky played a decade in the majors (starting at age 27), mostly with the Boston Red Sox, and had a sterling lifetime .307 batting average, coupled with an equally superior on-base-percentage of nearly .400. For 5 of his first 6 seasons, he hit well over .300. Known for having great eyes, he struck out only 4 percent of the time throughout his career -- an amazing feat -- and never struck out more than 32 times, and only 19 times in 712 plate appearances in 1949! He later managed the Red Sox and was a longtime coach for the club. His brother Vince Pesky was a minor league player and college coach.

Pesky began his big league career in 1942, when he was installed as Boston's regular shortstop. He hit .331 as a rookie, leading the American League with 205 hits, and finished second to teammate Ted Williams in the batting race. He entered the Navy in June of that year, was called to active duty at the end of the season, and served until December 1945.

After World War II, Pesky returned to the Red Sox in 1946 and once again led the AL with 208 hits. He also hit .335 that year, scored 6 runs in a May 8th contest against the Chicago White Sox, and made the only All-Star Team of his career. Boston reached the World Series that fall, and he is often blamed as the culprit in the team's Game Seven loss. In the eighth inning, he was the relay man on the play where the St. Louis Cardinals' Enos Slaughter scored the winning run from first on a bloop hit to left-center field by Harry Walker. Pesky was blamed for holding the ball too long before throwing home, but in fact, even a perfect throw without any hesitation may not have gunned down the speedy Slaughter.

Pesky bounced back from the October disappointment in 1947, when he again paced the AL with 207 hits, tying the major league record for most consecutive playing years leading his league in that category. He ended the season with a .324 average, third best in the league, and put together a 26-game hitting streak that season. He was moved from shortstop to third base in 1948, and his batting average fell to .281, but the next year he rebounded to .306 while driving in a career-best 69 runs. In 1951, he moved back to shortstop and hit over .300 for the sixth time in his first seven big league seasons.

Slowed by injuries, Pesky was traded to the Detroit Tigers during the 1952 season and ended his career with the Washington Senators after being dealt there in 1954. He retired with an amazing on-base percentage of .394. 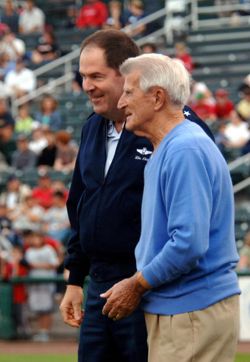 Following his playing days, Pesky was a manager in the Tigers' farm system for several years before moving back to the Red Sox organization. He managed the big league club in Boston in 1963 and 1964, but the club finished near the bottom of the standings both seasons. He then spent three years as a Pittsburgh Pirates coach before managing the Columbus Jets in the International League in 1968.

Pesky rejoined the Red Sox as a broadcaster from 1969 to 1974. He was a member of their coaching staff from 1975 to 1984 and managed the team again for five games in 1980, after Don Zimmer was fired late in the season. As a long-time coach, he was known for his fungo ability, hitting thousands of balls off the left-field wall at Fenway Park for Carl Yastrzemski, Jim Rice and Mike Greenwell and hitting the ground balls that eventually made Wade Boggs a gold glove third baseman. In 1990, a 70-year-old Johnny was the manager of the AAA Pawtucket Red Sox for the second half of the season, taking over for Ed Nottle. His coaching duties were interrupted when Jimy Williams became manager in 1997 as Jimy was also a defensive specialist. After that, his role with the team was reduced as his on-field instruction was limited. In 2004 he was banned from the Red Sox bench as he was not an official coach, but in 2005 he was seen sitting on the bench during most Red Sox home games. He lived in the Boston area until passing away in 2012 at age 93. At the time of his passing, Commissioner Bud Selig issued the following statement:

"The national pastime has lost one of its greatest ambassadors today. Johnny Pesky, who led a great American life, was an embodiment of loyalty and goodwill for the Boston Red Sox and all of Major League Baseball. A part of the Greatest Generation and forever one of The Teammates, Johnny was a wonderful player who excelled alongside his dear friends Ted Williams, Bobby Doerr and Dom DiMaggio. Just as importantly, Johnny touched the hearts of hundreds of Red Sox players and its legion of fans around the world. I am deeply saddened by the loss of this special man, whose number six will be a part of Fenway Park forever. I extend my deepest condolences to Johnny’s family, his many friends throughout the game and all the fans of the Boston Red Sox."

The right field foul pole at Fenway Park is named "Pesky's Pole" in his honor. The joke is that the pole marks the shortest home run that can be hit in the major leagues, given Fenway's quirky configuration, and that it was the only place the slap-hitting Pesky could have hit a major league home run. He did in fact hit a famous home run by wrapping the ball around the pole, but among his 17 major league homers, not all were hit to that friendly spot. His uniform number 6 was retired by the Red Sox in 2008. The Red Sox were on the road when he passed away, but in their first home game back, on August 21st, they organized a ceremony in Pesky's honor at Fenway Park, with every member of the team wearing his number 6 that night and holding a moment of silence before the game; the team had already been wearing a black armband on the right sleeve of their road uniforms in his memory since his passing, and added a patch with his number to their home uniforms as well.