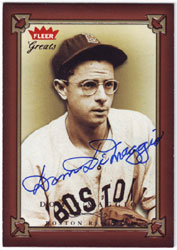 "Dom’s a throwback to the kind of players we used to have." - Ty Cobb

Brother of Joe DiMaggio and Vince DiMaggio, Dom DiMaggio had a relatively short career in the major leagues but was a big star in his own right, appearing in seven All Star games. Decades after his retirement, his candidacy for the Hall of Fame was rumored to have been discussed actively by the Veterans Committee.

Dom's entire major league career was spent with the Boston Red Sox, in the 1940's and early 1950's. An outfielder, he played center field alongside Ted Williams, who was constantly being compared to Dom's brother Joe.

Dom was with the San Francisco Seals from 1937-1939, and was a big star for the team, as his older brother had been. In 2006 he was elected to the Pacific Coast League Hall of Fame.

Dom scored over 100 runs in six of his ten seasons as a regular. He tended to steal 10-15 bases per year (the stolen base was very little used at the time, and these totals would usually place him in the league's top ten), and usually had 30-40 doubles. As a defensive outfielder, his range factors were uniformly excellent, even at the end of his career.

The New Bill James Historical Baseball Abstract lists him as of the top ten outfielders born in the 20th Century for baserunner kills (assists) per 1,000 innings.

Never much of a factor in MVP voting, he led the league in runs scored twice, in triples once, in stolen bases once, and in hit-by-pitch once. His lifetime batting average was .298, and his career OBP of 38 percent was exceptional. He was chosen as an outfielder on The Sporting News major league All-Star Game in 1946 (over his brother Joe, who had an off-year) along with Ted Williams and Enos Slaughter. Stan Musial was a first-baseman that year.

Based on similarity scores, the most similar players are Pete Fox and Jo-Jo Moore.

After baseball Dom was highly successful in business, running companies that supplied carpeting and foam padding for automobiles.