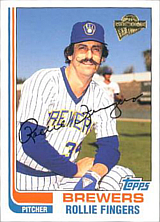 Inducted into Hall of Fame in 1992 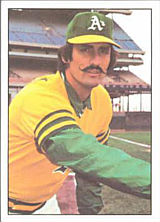 Known for his handlebar mustache, Rollie Fingers was one of baseball's first modern-day relief aces. Relying on his slider, he recorded 341 saves during 17 years in the majors, and was a familiar sight during the postseason, appearing in 16 World Series games. During his career, he earned both a Most Valuable Player Award and a Cy Young Award, and he was later inducted into the Hall of Fame.

The son of former minor league pitcher George Fingers, Rollie was born in Ohio and raised in California. He briefly attended Chaffey College before being signed by the Kansas City Athletics on Christmas Eve in 1964. He made his pro debut for the Leesburg A's in 1965, going 8-15 with a 2.98 ERA in 25 games (24 starts) for the club. He was almost exclusively a starter as he advanced through the A's chain and reached the majors with the team, now in Oakland, late in the 1968 campaign. His big league debut was anything but auspicious, as he gave up 4 earned runs in 1 1/3 innings against the Detroit Tigers on September 15th, his only appearance for the Athletics that year.

Fingers was back in the big leagues in 1969, and he would never return to the minors. He made his first big league start on April 22nd, throwing a five-hit shutout against the Minnesota Twins. Overall, he was 6-7 with a 3.71 ERA in 60 outings (including 8 spot starts) for manager Hank Bauer's club that year, and he led the team with 12 saves. Under new skipper John McNamara in 1970, he went 7-9 with a 3.65 ERA in 45 games split between the rotation and the bullpen. The A's made another managerial change in 1971, and after making 8 starts, Fingers was moved into the closer role by Dick Williams. He excelled in his new role as he recorded 17 saves and a 2.99 ERA that year, and his earned run average would not exceed 3.00 for nearly a decade. He also got his first taste of postseason baseball, making two appearances in the ALCS against the Baltimore Orioles.

Fingers' trademark waxed mustache originated during spring training in 1972. Reggie Jackson showed up to A's camp with a full beard, and many teammates (including Fingers) did not like it. In protest, they stopped shaving as well, thinking that owner Charlie Finley would make them all shave. Instead, Finley offered cash incentives to the player who could grow the best facial hair until Opening Day. Fingers went all out and adopted his trademark mustache based on the style of players from before the turn of the century. He won, and he wears the mustache to this day.

On the diamond, Fingers' success continued. In 1972, he saved 21 games during the regular season and added 2 more in the World Series as Oakland defeated the Cincinnati Reds. He earned his first selection to the All-Star Game in 1973, and in 1974, he led the American League with 76 appearances; each year, the A's repeated as World Champions. Midway through the 1976 season, owner Finley sold Fingers to the Boston Red Sox, along with Joe Rudi, rather than lose them to free agency at the end of the year. However, Commissioner Bowie Kuhn voided the deal "in the best interests of baseball", and Fingers finished out the year with Oakland. 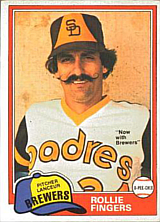 Following the 1976 season, Fingers signed a contract with the San Diego Padres worth more than three times what he was making with the Athletics. He did not disappoint, leading the National League with 35 saves (more than half of his team's 69 wins) in his first summer as a Padre in 1977. In 1978, on a team with three other future Hall of Famers (Gaylord Perry, Ozzie Smith, and Dave Winfield), Fingers again led the NL with a career-high 37 saves. Facing the Cincinnati Reds on June 7, 1980, he recorded his 228th career save to break Hoyt Wilhelm's lifetime record (a mark that was later broken by Jeff Reardon and is currently held by Mariano Rivera).

At the 1980 winter meetings, Fingers was traded twice in the span of a few days. First, he was sent from the Padres to the St. Louis Cardinals as part of a ten-player deal. Four days later, he was traded again, with Pete Vuckovich and Ted Simmons, to the Milwaukee Brewers for four players. His first year with the Brewers, the strike-shortened 1981 campaign, was perhaps his best season in the majors. In 47 games, he was 6-3 with a 1.04 ERA and an AL-best 28 saves as his team won the AL East title in the season's second half (the first postseason berth in club history). He won both the American League MVP and Cy Young Award. He put together another fine year in 1982 and became the first pitcher to record 300 career saves on August 21st. Less than two weeks later, he tore a muscle in his left arm that sidelined him for the remainder of the year. Despite his absence, the Brewers reached the World Series, falling to the Cardinals in 7 games. The Brewers tried to play coy with the Cardinals, not revealing the extent of Fingers' injury and keeping him on the postseason roster, but he was unable to pitch, and the team had to get by with Bob McClure and Pete Ladd as their bullpen mainstays in the postseason.

After missing the entire 1983 season with the previously sustained injury, a 37-year-old Fingers bounced back and put together another good year for Milwaukee in 1984, posting a 1.93 ERA and recording 23 saves. However, his season was cut short by a herniated disk in late July. He returned to the Brewers in 1985 but had his worst year in the majors, going 1-6 with a 5.04 ERA and 17 saves (but 8 blown saves). He was released at the end of the year. Following his release, he was offered a minor league contract by the Cincinnati Reds. But the Reds had a rule against facial hair that would have required him to shave his trademark mustache, so he retired.

In 1989, he played for the West Palm Beach Tropics of the Senior Professional Baseball Association and saved 6 games for the team. In 1990, Fingers again played in the SPBA, for the Sun City Rays, and pitched in 8 games and was 1-1 when the league folded.

Fingers was elected to the Baseball Hall of Fame on January 7, 1992 by the Baseball Writers Association of America. He is a member of the Milwaukee Brewers/Miller Park Walk of Fame and the Oakland A's Hall of Fame, with each team also retiring his #34. He is the only Hall of Fame pitcher with a losing record (114-118). He is considered one of the ten best relievers of all time according to The Relief Pitcher. for being the most dominant reliever of his era.

In early 2007, the state of Wisconsin published a list of their biggest tax delinquents. Fingers ranked 7th, owing the state over $1.4 million. It was the largest debt from income tax.

In addition to his father, Fingers' brother, Gordon Fingers, was a minor league pitcher in the A's organization. His son Jason Fingers was drafted by the Kansas City Royals in 2000. 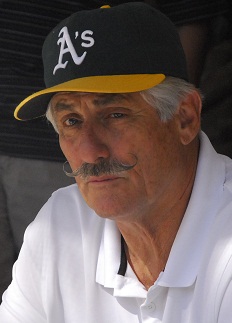