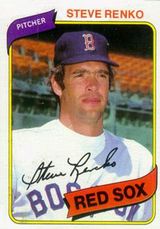 Steve Renko pitched 15 seasons in the big leagues and won 134 games. He was drafted by the New York Mets in the 24th round of the 1965 amateur draft and began his career as a first baseman and outfielder before being converted to pitching in 1967. In 1969, he was acquired by the Montreal Expos in the mid-season trade that brought Donn Clendenon to New York and was immediately inserted in the expansion team's starting rotation, going 6-7. 4.01 in 18 games (15 starts). He remained with Montreal until early in 1976, when he was traded to the Chicago Cubs along with Larry Biittner in return for Andre Thornton.

He was the last pitcher to bat seventh or higher in a major league game until the feat was duplicated by Dontrelle Willis on September 22, 2005. Renko did it on August 26, 1973, and went 2-for-3 against the San Diego Padres [1]. He was one of the best-hitting pitchers of his generation, but after the Cubs sent him to the Chicago White Sox in mid-1977, he never had another plate appearance in six and a half seasons, as the remainder of his career was all in the American League before the introduction of interleague play. In addition to his use in the middle of the line-up by the Expos, he played a few innings at first base in one game in 1972, when the Expos ran out of available players after a couple of ejections in an extra-inning game. He recorded 5 putouts in 2 2/3 innings, which are the most fielding chances by any pitcher playing in the field in a game since at least 1950. As a hitter, he hit .215 with 16 doubles and 6 homers in 531 at-bats and was used 10 times as a pinch-hitter. His 100 at-bats for the Expos in 1971 are a franchise record for a pitcher.

It's not very common for a pitcher to win 100 games but to lose more games than he won. Renko had a career mark of of 134-146. He was particularly hurt by his 1972 season when he went 1-10 for the Montreal Expos. However, he had some good seasons, too, including the year right after his 1972 season when he went 15-11 with an ERA of 2.81 for the Expos in 1973. The Expos finished under .500 both years. In addition to his time in Montreal and with both Chicago teams, he had the misfortune of pitching for a very poor Oakland Athletics team in 1978, when he went 6-12, then was a member of the Boston Red Sox for two seasons in 1979 and 1980. Before the 1981 season, he was traded to the California Angels along with fred Lynn in return for Jim Dorsey, Joe Rudi and Frank Tanana in what was a blockbuster trade at the time. After two seasons with the Angels, he finished his season with his hometown team, the Kansas City Royals, in 1983. Bill James joked that the Royals had a staff full of older pitchers who couldn't break a pane of glass with their fastballs that season, citing Renko, Larry Gura and Paul Splittorff as prime examples.

The similarity scores method shows the most similar pitchers to Renko as other pitchers who won 100+ games but lost more than they won, such as Kevin Gross, Floyd Bannister, and Steve Trachsel.

Renko was the quarterback on the Kansas football team which included Gale Sayers. He was drafted by the Oakland Raiders in 1966.