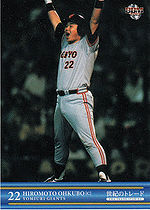 Hiromoto Okubo was a catcher in the US and Japan who became a coach.

Okubo later became a baseball commentator on TV. He was hired as the hitting coach of the Seibu Lions and was credited with making them the top force in the 2008 Pacific League en route to the 2008 Japan Series title.

Things unravelled quickly after the Japan Series title. In November 2008, he was accused of striking a female friend. He resigned in disgrace on December 6 of that year. In 2012, he became a coach for the Rakuten Golden Eagles, though, and he was promoted to manager for 2015. After a last-place, 57-83-3 finish, he did not return for a second season.