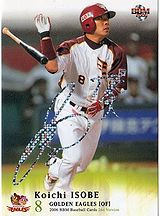 Koichi Isobe was the first All-Star representative in the history of the Rakuten Golden Eagles. He went 8 for 15 with a homer for the Japanese national team that won Silver at the 1995 Intercontinental Cup. Had he qualified, he would have been second in the event in average, behind Jeffrey Cranston. A marginal player in his first three years for the Kintetsu Buffaloes from '97 through '99, Isobe hit .311/.367/.456 in 2000 and did better in 2001, hitting .320/.381/.508 with 42 doubles. His performance helped lead the Buffaloes to their final Japan Series appearance, though he played third fiddle to Tuffy Rhodes and Norihiro Nakamura. He made the Best Nine. He faded back the next two seasons but recovered in 2004, hitting .309/.391/.532 with 26 home runs as the best hitter on Kintetsu in their final season.

When the Buffaloes merged with the Orix Blue Wave, Isobe refused to play for the new team that resulted. Instead he signed with the expansion Golden Eagles. He hit .264/.325/.417 with 16 homers in Rakuten's initial season, while playing almost every game in right field. He slipped to .275/.327/.353 the next year, only smacking four homers and falling from third in the lineup to 7th or 8th before losing his job as the starting RF.