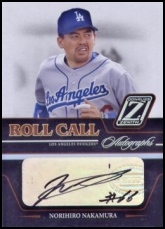 Norihiro Nakamura played briefly in the majors but was a star in Japan, hitting over 400 home runs and getting over 2,000 hits between Japan and the US. He is the brother-in-law of Takayuki Murakami (marrying Murakami's sister) and thus is also related to Ren Nakata (Murakami's nephew) and HIroki Kobayashi (Nakata's father).

He was the 4th-round draft pick of the Kintetsu Buffaloes in 1991, picked out of high school. He was drafted in the same round as Ichiro Suzuki and Tomoaki Kanemoto. He spent his first couple seasons in the minors, going 7 for 36 in limited time with Kintetsu. At age 20-21, he began splitting third base with Yoshiaki Kanemura and hit .281/.343/.484 but struck out 49 times in 192 at-bats; he hit for the cycle once. By 1995 Norihiro was the regular starter but hit just .228/.307/.400. He homered 20 times and made the All-Star team in the Pacific League at third base. He was three homers behind Buffaloes leader Lee Stevens and also played 21 games at shortstop, four in the outfield and three at first base. While his OBP and average were poor, he was showing significant power for a youngster and also led Kintetsu with 51 walks, while his 92 strikeouts were 37 less than Stevens.

Nakamura almost had an identical line in 1999 (.261/.362/.486, 31 HR, 95 RBI, 79 BB, 116 K). After a two-year absence, he returned to the All-Star team; he also won his first Gold Glove and was named to his second Best Nine. He led the league in walks and was second to Rhodes in home runs and RBI - the Rhodes/Nakamura/Clark trio combined for 100 HR. 2000 was an even better season as he hit .277/.381/.578 with 39 homers, 110 RBI and 80 walks (112 strikeouts as well); he won a Gold Glove, made the Best Nine, made the All-Star team, led the league in RBI and also hit the most homers for the only time in his career. He was arguably the top pure power threat in the PL, outpacing players like Nobuhiko Matsunaka, Hiroki Kokubo, Rhodes and Wilson in two key power statistics; some of those others had higher slugging percentages due to Norihiro's weaker contact abilities. He hit 14 more homers than teammate Tuffy. He was the cleanup hitter in the 2000 Olympics for Japan, hitting 12 for 39 with 2 homers and 8 RBI.

Nakamura took some advice from Hiromitsu Ochiai before the 2001 season to use the whole field and it paid off. Tuffy had his brightest season in 2001, cracking 55 homers, a new PL record. Norihiro added 46, scored 109 runs, drove in 132, had 331 total bases, 104 walks (to 106 Ks) and hit .320/.434/.630 to form one of the finest one-two threats ever in Japan. They set a two-man combined home run record, hitting for more than ever attained by the famed Sadaharu Oh-Shigeo Nagashima duo. When the Daiei Hawks pitched around Rhodes late in the year during his threat to break Oh's NPB home run record, Nakamura criticized the move as cowardly and unfair to Rhodes. Norihiro homered in all three All-Star games as well and was MVP of the third one. He tacked on a 50th homer of the year in the Japan Series but hit just .111/.200/.333 in the Series and was a big part of Kintetsu's failures in the Series. It was still the Buffaloes' best season in 12 years, largely in part to the two-man show. While Rhodes had captured most of the individual honors, Nakamura still led the league in both RBI and OBP and won another Gold Glove.

After the 2002 season the free agent third baseman reached an agreement with the New York Mets but when it became public before he told the Buffaloes, he returned to his Japanese team. A knee injury helped end a streak of 694 consecutive games played. His statistics also fell drastically, as he posted just a .236/.357/.459 line and missed the All-Star and Best Nine teams after four straight appearances. He hit 23 homers, 19 fewer than he had smacked a year prior. The only bright spot was a game in which he drew five walks, tying the league record.

Nakamura's knee problems continued in 2004 but he bounced back a bit to .274/.390/.468 with 19 HR. He topped 300 career homers, again played in the Olympics and made the All-Star team but was a shadow of his former self offensively. With Rhodes gone, he was unable to carry the load offensively and only finished third on his own team in homers, behind Koichi Isobe and Hirotoshi Kitagawa. The glory days were behind him.

In 2005 Kintetsu merged with the Orix BlueWave to become the Orix Buffaloes. Nakamura, not pleased with the move, used the opportunity to go overseas through the posting system. Hypocritically, he had earlier criticized then-teammate Akinori Otsuka for requesting to be posted. As he was damaged goods and past his prime, interest was far lower than it had been several years before. The Los Angeles Dodgers signed him and assigned him to the Las Vegas 51's, giving Jose Valentin the third base job. When Valentin was a bust, Nakamura was called up from AAA but fared even worse than his predecessor at third (he hit .128/.171/.179 in 39 AB in the majors) and returned to Las Vegas. He hit .249/.331/.487 for the Stars, with 22 home runs. These were fairly unimpressive statistics for a player in that environment, where guys like Tim Pyznarski and Eddie Williams had put up huge numbers. It was pretty clear that Norihiro had gone to Organized Baseball too late to make a significant impact.

One item that emerged out of Nakamura's play in the US was in regards to player image. Often criticized as heavy and "porcine" in Japan, Nakamura showed a typical build for American ballplayers and was even used regularly at shortstop again (16 games there). The body image expected was obviously different. While Nakamura's performance was within expectations for his work the prior two seasons in Japan after injuries and age were taking their toll, some claimed that Norihiro (known for his dyed hair and bat-flipping routine) lacked the rigorous approach of older Japanese players and that is why he did not make a successful transition. The statistical evidence would appear to counter such an argument.

In 2006 Nakamura returned to Japan, signing with the Orix Buffaloes at the request of Akira Ogi, who passed away before the season began, making peace with the team he had left a year prior. Entering the year Norihiro ranked among the career NPB leaders in homers (307, 29th), grand slams (13, tied for 3rd) and strikeouts (1,115, 23rd). Nakamura continued his decline in the 2006 season, batting only .232/.292/.409 as an ineffective cleanup threat.

Orix and Nakamura did not come to terms following 2006 and he was given a try-out by the Chunichi Dragons for 2007. The team signed him, giving him a 98% pay cut over the prior year. He bounced back very well, hitting .293/.359/.477 with 20 homers and 79 RBI. He only finished among the Central League's top 10 in two categories (8 sacrifice flies, third best and 18 double plays ground into, the most), clearly far from his prime, but certainly a productive #5 or #6 hitter. He also won a Gold Glove at third base. Nakamura then dazzled in the 2007 Japan Series, hitting .444/.500/.667 with 4 doubles, 3 runs and four RBI to help Chunichi win its first title in 53 years. Nakamura was named Japan Series MVP for his efforts. Nakamura got a 50-million yen salary for 2008, a raise of more than eight-fold.

Nakamura won his 7th Gold Glove in 2008, breaking the NPB career record shared by Akinori Iwamura, Nakamura and Masayuki Kakefu. For the year, he had hit .274/.340/.460 with 24 home runs at age 34/35, his last big season. He tied Shinnosuke Abe for 7th in the CL in dingers, was 8th in walks (50, between Kazuhiro Hatakeyama and Masahiko Morino) and was third in strikeouts (119, trailing Tyrone Woods and Yuki Yoshimura).

Switching clubs as a free agent yet again, he signed with the Yokohama BayStars but batted just .209/.262/.278 in 126 plate appearances in 2011, used as a pinch-hitter and backing up Brett Harper at 1B. He got into his 2,000th NPB game as a defensive sub for Yoshitomo Tsutsugo at 1B on October 4. He rebounded one more time, hitting .274/.346/.407 with 61 RBI, 24 doubles and 11 home runs in 2012, taking over at 1B when Harper left. With Japan having switched to a more pitcher-friendly ball in recent years, those numbers were good for 8th in the CL in doubles and 8th in RBI (between Kazuhiro Wada and Hisayoshi Chono). On May 5, 2013, Nakamura doubled off Kenichi Nakata for his 2,000th NPB hit, the 43rd player to that figure (though 5th in 2012-2013, with Motonobu Tanishige joining the crowd a day later).