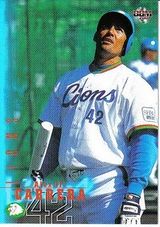 Venezuelan slugger Alex Cabrera is best known for his 55 home-run season in the Pacific League in 2002, tying the Nippon Pro Baseball record. At age 41, he broke the Venezuelan League home run record. He hit over 550 home runs in his professional baseball career and won MVP awards in both Japan and Venezuela, becoming the first three-time MVP in Venezuelan ball. His son, Ramon Cabrera, played in Venezuela while Alex was still active and made his major league debut in 2015.

In the Cubs system[edit]

In 1999, Alex added another country to a baseball travelogue that had already included the Dominican Republic, Venezuela, the United States of America and Mexico. That year, Cabrera joined the China Trust Whales and helped power them to the CPBL title with 18 homers in the season's 89 games. His .325 average was third in the league, 8 points behind the leader, and his 63 runs scored and 23 doubles were tops among the league's top 10 hitters.

His one taste of the majors and torching AA[edit]

In December 2000, Alex was purchased by the Seibu Lions. He ripped Pacific League pitchers for 49 homers, six behind Tuffy Rhodes, and drove in 124 (third-best, eight behind Norihiro Nakamura). Batting .282/.385/.613, Cabrera lost in the Best Nine chase to Michihiro Ogasawara. Alex hit .341 for Pastora that winter and again cracked 13 homers (in just 132 at bats), but failed to lead the league this time. Back in Japan, Cabrera had his best year at .336/.467/.756 for Seibu in 2002. He was second in the PL in average (4 points behind Ogasawara), led in OBP as well as slugging (139 points ahead of runner-up Kazuo Matsui), tied the home run record, tied Nakamura for second in RBI (115, two behind Rhodes), scored 105 runs (second to Matsui) and drew a league-best 100 walks (14 more than Nakamura; 29 were intentional). Cabrera lost a home run on May 6 with a fluke play when his liner hit the roof and bounced back onto the field for a single; it would have given him 56 for the year and the new record. He was named to the Best Nine at first base and additionally was named the Pacific League's MVP, becoming the first Latino player so honored. Additionally, Seibu won the PL pennant, only to be swept in the Japan Series despite a .357/.438/.929 series by Cabrera, who homered in the first two games. He won the Fighting Spirit Award for his performance in a losing cause in the Series.

Cabrera hit his 54th homer of 2002 with 11 games left and tied the record with five games to play. Seibu then matched up with the Daiei Hawks, managed by Sadaharu Oh. Oh had previously been criticized for seemingly trying to protect his home run record from Randy Bass (in 1985) and Tuffy Rhodes (in 2001) by not letting his teams pitch to them. In the first game against Daiei, Cabrera saw six strikes, walked twice and was hit by a pitch. Frustrated and ordered by manager Haruki Ihara to strike back, he elbowed the Hawks catcher in the head while trying to score during the game. Cabrera said that Oh "didn't want me to break his record... It's not professional." In contrast to the Bass situation, the Japanese media and fans in large part sided with Cabrera. Yomiuri Daily News columnist Jim Allen wrote that "[T]hey should put an asterisk and a note next to Oh's name in the record book." Ultimately, Wladimir Balentien would break Oh, Rhodes and Cabrera's record in 2013.

Cabrera continued to shine for Seibu in 2003, to the tune of .324/.418/.705. He beat Ogasawara for the slugging lead by 56 points and was second to Rhodes in homers, 51 to 50, while driving in 112 runs. He made the PL Best Nine at DH. In 2004, the slugger was sidelined until mid-June after breaking his forearm in spring training. Overall, Cabrera still hit .280/.369/.644 with 25 home runs in 64 games, though he was clearly not up to his old level of play. Seibu finished second but, thanks to rule changes prior to the season, the Pacific League now had a playoff system. With a healthy Alex around, they beat the Nippon Ham Fighters in the first round then toppled the regular-season champion Hawks to earn a return trip to the Japan Series. In the Series, Cabrera hit .296/.387/.705 with three homers and nine RBI to help his team to a victory in seven games.

In 2005, Cabrera hit .300/.407/.606 and was among the leaders in walks (71, five behind Nobuhiko Matsunaka, OBP (five points behind Matsunaka), RBI (tied for third with 92) and slugging (third, behind Matsunaka and Julio Zuleta). Matsunaka and Zuleta were named to the Best Nine at DH and first base. Cabrera did make history, becoming the fastest player in Nippon Pro Baseball history to 200 homers, reaching that mark in 538 games, 40 fewer than it had taken Ralph Bryant. In winter ball, Cabrera helped the Caracas Lions to the first Caribbean Series title by a Venezuelan League team in 17 years. He hit .360 with 2 home runs and 7 RBI in the 2006 Caribbean Series and made the All-Star team at DH. In 2006, Cabrera continued to show his skills for Seibu, smacking the ball to a .315/.404/.564 line, though he had been over .350 in late June. He finished second to Matsunaka in the batting race, tied Naoyuki Omura for fifth in runs scored (74), was fifth in hits (147), tied MVP Ogasawara for the RBI lead (100), was one homer behind league leader Ogasawara (Alex hit 31), was third in total bases (263), third in strikeouts (115), fourth in walks (68), second in OBP (almost 50 points behind Matsunaka) and second to Ogasawara in slugging. Cabrera stated that his goal for 2007 was 50 home runs, but he hit only 4 in April. He reached 250 NPB homers in his 733rd game in Japan, tying Bryant for the quickest to that level. He was the 50th NPB player to hit 250 home runs.

The Mitchell Report, released in 2007, indicated that Cabrera had received steroids while with the Arizona Diamondbacks. He denied the claim and said he had not tested positive in 2007, when Japan instituted steroid testing. Officials from the Seibu Lions said Cabrera appeared to be losing bulk and muscle definition once Japan began testing. In Venezuela that winter, he hit .284/.418/.642 with 13 home runs, tying Richard Hidalgo for second, two behind Eliezer Alfonzo.

Cabrera signed with the Orix Buffaloes for 2008, inking a 250-million yen deal with incentives. That year, he became the oldest first baseman (at 36) to win a Gold Glove in NPB history; it was especially striking in that he had never won the award before and had played DH at points in his career due to his glovework. Cabrera was named on 40 of 143 ballots, 2 more than Kazuya Fukuura; 53 writers left their ballots blank, not liking any of the options at the position. He hit .316/.394/.593 with 36 home runs, 88 runs scored and 104 RBI. He reached 300 homers in NPB in his 894th game, the fastest player to that mark; Koji Aoyama surrendered number 300. He was among the PL leaders in average (5th, between Takumi Kuriyama and Toshiaki Imae), runs scored (3rd behind Takeya Nakamura and Kensuke Tanaka), hits (159, tied for 6th with Tanaka), total bases (299, 1st by one over Nakamura), RBI (2nd, 14 behind Rhodes), homers (3rd behind Nakamura and Rhodes), walks (62, tied for 4th with Tanaka), strikeouts (110, 7th, between Nobuhiro Matsuda and Hiroyuki Nakajima), slugging (1st, 10 points ahead of Rhodes), double play grounders (17, 2nd to Takeshi Yamasaki), OBP (tied with Rhodes for second behind Nakajima) and OPS (1st). He was named to the Best Ten at first base.