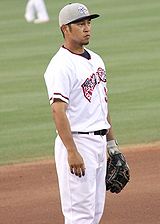 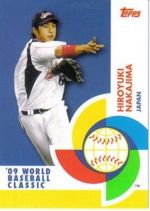 Hiroyuki Nakajima was the shortstop for the Seibu Lions for a number of years, having succeeded Kazuo Matsui in that role. On December 7, 2011 the New York Yankees acquired his rights via the posting system.

Nakajima was Japan's top hitting starter when they won the 2009 World Baseball Classic as he batted .364/.516/.545 with 6 RBI in seven games; he missed two contests due to the flu. He hit four doubles to tie Miguel Cabrera and Atsunori Inaba for third in the tourney; two of the doubles came in the semifinal win over the USA. In the finals, Nakajima played a key role in Japan's 5-3 win. In the 3rd, he singled off Jung Bong and came home on a hit by Michihiro Ogasawara to make it 1-0. In the 7th, he singled in Yasuyuki Kataoka for a 3-1 lead. Jimmy Rollins beat him out for All-Tournament honors at SS.

After the 2011 season, Nakajima requested that his name be placed on the posting system in order to be able to play in the United States. Seibu agreed and on December 7th, it was announced that the successful bid for his services had been placed by the New York Yankees, for an estimated $2 million. However, the Yankees were unable to come to an agreement with Nakajima, whom they viewed as a potential back-up to Derek Jeter at SS and Alex Rodriguez at 3B, so he returned to Seibu for another season, after which he would become a full free agent. It was speculated that the Yankees had been surprised that their very low bid had been successful, and as a result were not prepared to offer him a contract commensurate with his experience and track record. After the 2012 season, Nakajima was now a full free agent and this time found a major league team willing to pay for his services. On December 18th, the Oakland Athletics announced that they had signed him for two years.