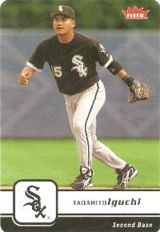 Tadahito Iguchi was a star in Japan before coming to the United States at age 30 to play in the majors. He was part of the 2005 World Series-winning Chicago White Sox as well as the division-winning Philadelphia Phillies in 2007. He also won the 2010 Japan Series and was an Olympic Silver Medalist.

He was a college superstar in Japan, winning a Triple Crown one year and setting a Tohto League record with 24 career homers. He won Gold with the Japanese national team in the 1995 Asian Championship. In 1996 he appeared on Japan's Olympic team.

Iguchi was the 1996 first-round draft choice of the Daiei Hawks. Before his first season began, he tore ankle ligaments and he struggled his first few years. He played for the West Oahu CaneFires in 1997. In his first three seasons he never hit over .224 or had an OBP over .310. He hit 21 homers in 1998 but the free-swinging player (234 Ks in 1998-1999) was not contributing as expected.

He emerged as a star in 2001 when he hit .261/.346/.475 with 30 homers. Finally utilizing his speed, he stole 44 bases in 53 tries to lead the Pacific League in swipes. He won a Gold Glove at second base (prior to 2001 he had served as Daiei's shortstop) and made his first Best Nine team. He also made the first of four consecutive PL All-Star teams.

Iguchi played for Japan in the 2001 Baseball World Cup and batted .214/.353/.357. He did drive in 10 in 9 games, tying Akihiro Higashide and Evert-Jan 't Hoen for third in the tourney behind only Chin-Feng Chen and Yohanny Valera. Iguchi also drove in the only run in the key semifinal loss to Cuba, singling home Higashide in the 1st against Jose Contreras. The large RBI total can probably be attributed to the fact that Iguchi hit behind Hirokazu Ibata (.561 OBP, 8 SB) and Higashide (.432 OBP), giving him lots of opportunities to plate runners.

Iguchi changed his batting approach in 2003, focusing on hitting the ball more frequently to the opposite field. His production soared to .340/.438/.578. He increased his walk total by 54, led the PL with 112 runs, was second to Michihiro Ogasawara in OBP, 3rd in walks, 3rd in times hit by pitch tied for 3rd in doubles and led in steals (42). He again made Best Nine and was part of the first quartet of 100-RBI men in Nippon Pro Baseball history (joining him were Nobuhiko Matsunaka, Kenji Johjima and Pedro Valdes). The Hawks won their second Japan Series with Iguchi (they had won in 1999 and lost in 2000).

In 2004 Iguchi kept up the strong pace, hitting .333/.394/.549 with 24 HR, 96 R and 18 SB. His 170 hits were one back of the league lead and he was second to Matsunaka in runs and he was third in the PL in hitting. He again made the Best Nine. Daiei had the best record once again but it was the debut of playoffs in Japan and the Hawks fell to the Seibu Lions. 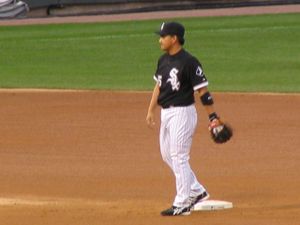 Iguchi in uniform for the White Sox

Iguchi went over to the U.S. in 2005 with the Chicago White Sox. Expectations were low due to the disappointing showing of another PL infielder, Kazuo Matsui, with the New York Mets in 2004. But Iguchi emerged as a top Rookie of the Year candidate and then provided some heroics in the American League Division Series to help lead the White Sox to their first postseason series victory since 1917. Overall, he hit .278/.342/.438 as a rookie with 15 home runs and 15 stolen bases (in 20 tries). He posted a 104 OPS+ and tied for seventh in the American League with 6 triples. He only batted .191 in the postseason.

Iguchi started slowly for the Sox in 2007, only hitting .251/.340/.382 (89 OPS+) after 90 games. With Danny Richar playing well in the minors, Chicago began peddling Iguchi. The Philadelphia Phillies lost Chase Utley to injury right before the trading deadline, making them a prime candidate. They dealt Michael Dubee to Chicago in exchange for Iguchi. For the Phillies, Tadahito hit .304/.361/.442 for a 103 OPS+, playing well once again. He was 0 for 1 with two walks in the postseason. Iguchi signed with the San Diego Padres in the off-season.

Returning to Japan, he signed with the Chiba Lotte Marines for $2 million per year plus incentives. He hit .281/.391/.475 with 19 home runs and 71 runs in 2009, making his fifth PL All-Star team. Hitting cleanup on April 7th, he went deep off another ex-major leaguer, Kazuhito Tadano, for his 150th NPB homer. He had now homered from every spot of the batting order in NPB. He finished third in the PL in walks (68, behind Kensuke Tanaka and Hiroyuki Nakajima) and tied for second in OBP with Teppei Tsuchiya and Atsunori Inaba, .007 behind Nakajima.

In 2010, he got his 1,000th hit, an infield single off Hiroshi Kisanuki on April 4th. Far from being washed up, he batted .294/.412/.476 with 98 walks, 44 doubles, 17 home runs, 88 runs and 103 RBI. He was an All-Star for the sixth time. He led the Pacific League in doubles (3 ahead of Eiichi Koyano), tied Tanaka and Yuichi Honda for third in runs, was second in RBI (6 behind Koyano), was 7th in total bases (253, between Nakajima and Yasuyuki Kataoka), led in walks (18 more than runner-up Takumi Kuriyama), led in HBP (14), tied for third in sacrifice flies (7), tied Randy Ruiz for fifth in whiffs (114), was third in OBP (behind Alex Cabrera and Tsuyoshi Nishioka) and ranked 8th in slugging (between Nishioka and Koyano). Tanaka beat him out for the Best Nine pick at 2B. In the 2010 Japan Series, he starred, batting .371/.371/.657 with 4 doubles, 2 home runs, 5 runs and 5 RBI in 7 games, taking both Masafumi Hirai and Masahiro Yamamoto deep as the Marines topped the Chunichi Dragons in 7 games. He did not win Series MVP, which went to the similarly stellar Toshiaki Imae.

In 2013, Iguchi got his 2,000th hit between Japan and the USA, off Rakuten Golden Eagles ace Masahiro Tanaka on July 26th, a home run. He was the 5th player to get 2,000 hits between NPB and MLB, following Ichiro Suzuki, Hideki Matsui, Kazuo Matsui and Norihiro Nakamura; only Nakamura got his 2,000th while in NPB. He became the 6th player to get his 2,000th NPB hit or NPB+MLB hit on a home run, following Makoto Matsubara, Hideji Kato, Hiromitsu Ochiai, Nakamura and Alex Ramirez. He was the 4th player to join the meikyukai that year, following Ramirez, Nakamura and Motonobu Tanishige. He finished the season with a .297/.390/.511 batting line, 31 doubles, 23 home runs, 67 walks and 83 RBI while moving to first base as he was getting older. He was 4th in the PL in doubles (between Uchikawa and Casey McGehee), 7th in home runs (between Dae-ho Lee and Nobuhiro Matsuda), tied Yuya Hasegawa for 9th in RBI, was 6th in walks (between Dai-Kang Yang and Yoshio Itoi), 6th in OBP (between Andruw Jones and Hideto Asamura), 4th in slugging (between McGehee and Hasegawa) and 4th in OPS (between Hasegawa and McGehee) despite being the second-oldest regular (Inaba was the only one older). It was his last very productive season.