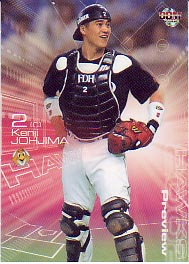 Kenji Johjima was the number one draft pick of the Daiei Hawks in 1994. He spent his first couple years in the Japanese minors. In 1996, he set a Western League record with 25 homers and led the league with 63 RBI; that year he became the second player in Western League history to hit grand slams in consecutive at-bats.

In 2003 Johjima had his best season yet - .330/.399/.593 with 39 doubles, 34 homers, 119 RBI and 101 runs. For the first time he walked more than he struck out (53-50). He won his 5th Gold Glove, made his 4th Best Nine and his 6th All-Star squad. He led the Pacific League in total bases, was third in runs (behind Tadahito Iguchi and Kazuo Matsui), second in hits (182, trailing Yoshitomo Tani), second in RBI (4 behind teammate Nobuhiko Matsunaka, second in doubles (trailing Kazuya Fukuura) and third in homers (behind Tuffy Rhodes and Alex Cabrera). He was part of the first quartet of 100-RBI men in Nippon Pro Baseball history, joining with Matsunaka, Iguchi and Pedro Valdes. He also became the first catcher in NPB history to play in every single game. For his efforts in leading Daiei to their second Japan Series in his career, Johjima was named MVP of the Pacific League. He played for Japan in the 2003 Asian Championship; they won Gold and qualified for the 2004 Olympics.

2004 saw Johjima miss time while playing on Japan's bronze-medal Olympic team; he hit .378/?/.676 in the Olympics with 8 runs and 7 RBI as one of the top sluggers. He still played enough to hit .338/.432/.655 with 36 homers. He again was an All-Star and Best Nine. He was third in slugging behind Matsunaka and Fernando Seguignol, third in OBP behind Matsunaka and Michihiro Ogasawara, third in runs (91, trailing teammates Matsunaka and Iguchi) and set a new league record for times hit by pitch (22).

2005 was another fine year offensively for the Hawks catcher, who hit .309/.381/.557 - 6th in the Pacific in slugging and OBP. He missed two weeks due to a right shoulder injury then hurt his shin late in the year, knocking him out for the post-season. Despite the time he missed, Johjima still made the Best Nine for the sixth time and also won his 7th Gold Glove.

After the season, Johjima became a free agent. He received consideration from several major league teams and signed a three-year contract with the Seattle Mariners on November 21st, becoming the first Japanese catcher to ink a deal with an MLB club. Kenji's career in the US started off on a fine note as he homered in his first two games in 2006. He hit .291/.332/.451 with 18 homers in a sound rookie campaign and handled the pitching staff well.

Despite his 2008 struggles, Johjima was Japan's main catcher in the 2009 World Baseball Classic, hitting .333/.353/.467. He homered off Jae-woo Lee for one of just four Japanese homers during the tourney. Kenji managed to pick Hyun-soo Kim off second base in the second of five Japanese games against South Korea. He hit two sacrifice flies in Japan's semifinal win over Team USA.

Johjima signed a four-year deal with the Hanshin Tigers after leaving Seattle.