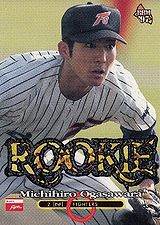 Michihiro Ogasawara played for NTT Kanto's industrial league team after high school. In 1996 he was drafted by the Nippon Ham Fighters in the third round. He was a backup catcher for two years, the team's most frequently used pinch-hitter in '98. Ogasawara was moved to first base in 1999 and immediately became the top 1B in the Pacific League. He hit .285/.349/.499, was second to Tuffy Rhodes with 90 runs and 34 doubles and second to Kazuo Matsui with 156 hits. He was named to the Best Nine at 1B and made the first of seven consecutive All-Star teams (an actuve streak as of 2005).

In 2000 Ogasawara improved to .329/.406/.552 with 31 HR and 102 RBI. He placed third in the Pacific League in batting average, led in runs (126, 27 more than Matsui), hits (182) and was third in the League in steals (an impressive 24 for a former catcher). Ogasawara's run total set a new Pacific League record - the old mark had been 118 by Hiromitsu Ochiai in 1985. Ogasawara joined with Nigel Wilson, Atsushi Kataoka and Sherman Obando to form the Big Bang Offense. He failed to make Best Nine, which went to Daiei Hawks 1B Nobuhiko Matsunaka.

2001 was even better for Ogasawara - .339/.407/.582 with 40 doubles, 32 homers and 108 runs scored. He won his third consecutive Gold Glove at first, made his second Best Nine team and again led the league in hits. He reached base in 60 consecutive games that season and set a record by scoring runs in 17 straight contests. He finished 7 points behind Kazuya Fukuura in the batting race.

Ogasawara failed to set a new record in 2002 but won his first batting title, at .340/.430/.601. He was third in the league with 86 bases on balls and second to Alex Cabrera in slugging. He again missed the Best Nine, as Cabrera made it instead at first base.

In 2003 the Fighters converted Ogasawara to third base and he won his 5th Gold Glove in a row. That year he hit .360/.473/.649 with 31 homers and 100 RBI. He won his second straight batting title and again was runner-up to Cabrera in slugging. He led in OBP for the first name and his 93 walks were second to Rhodes. In August, he reached base 14 times in a row, tying the record set two months earlier by Yoshinobu Takahashi. He played for Japan in the 2003 Asian Championship; his country won Gold at the event.

2004 was cut short for Ogasawara as he spent some of the summer playing in the Olympics, as Japan's 1B. He hit .345/.449/.549 and lost the batting race to Matsunaka by 13 points; he also lost the OBP title to the Daiei 1B by 15 points. After four straight seasons with 30+ homers, he dropped to 18, and his other counting stats were hurt by his Olympic time off. He also had his Gold Glove streak snapped at 5.

In 2005 Ogasawara's average fell drastically as he batted only .282/.362/.558, his production fading for the third straight year. He picked up the power, clubbing 37 homers (3rd in the league) but was just 5th in slugging and 10th in OBP. He was third with 61 walks and tied for third with 92 RBI. His 91 runs scored were still good enough for second to Matsunaka. He also struck out a career-high 114 times.

After the season, the free agent signed for four years at 3.8-oku yen per year with the Yomiuri Giants as the big name on the Japanese free agent market. Like the top free agent pitcher, Hiroki Kuroda, Ogasawara opted to stay in Japan instead of diluting NPB play further by moving to the US.

Ogasawara batted .313/.363/.539 his first season with Yomiuri with 95 runs and 31 homers. He was 4th in the 2007 Central League in average, second to Norichika Aoki in runs, third in hits (177), 4th in doubles (33), second in total bases (305, trailing Alex Ramirez), tied with Tomoaki Kanemoto for 7th in homers, tied with Yoshinobu Takahashi for 9th in RBI (88) and 4th in slugging. Surprisingly, he drew just 43 walks and missed the top 10 in OBP. He was named MVP for the second straight season, having now been honored in both of Japan's top leagues. He became the second player in NPB history to win the MVP in each league - Yutaka Enatsu was the only one to do so beforehand. After the season, he had knee surgery, eliminating him from Japan's roster for the 2008 Olympics qualifiers.

Ogasawara started at first base for Samurai Japan in the 2009 World Baseball Classic and had the worst OPS on the tourney champs, going 8 for 32 with 3 walks, 10 strikeouts and no extra-base hits; he tied Adam Dunn for the most K's. He drove in the first run in the finale, singling home Hiroyuki Nakajima in the third while facing Jung Bong; Japan went on to win 5-3.