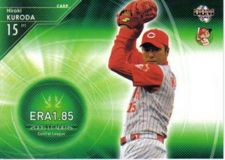 In almost 57 more innings in 2000, he allowed just three more runs and was 9-6 with a 4.31 ERA. He led the Central League with seven complete games and threw four in a row at one point. Kuroda continued to make strides in 2001, going 12-8 with a 3.03 ERA. He threw a league-leading 13 complete games (and allowed the most hits, 175), including five complete outings in a row. On August 22, he threw a one-hitter, allowing only an infield hit to Hirokazu Ibata. In his first All-Star game, he struck out the side on 10 pitches.

2005 marked Kuroda's best year to that point. Hiroki went 15-12, 3.17, tying Tsuyoshi Shimoyanagi for the league lead in victories. He was second to Daisuke Miura in ERA and third in strikeouts (165 in 212 2/3 IP). He led in complete games for the fifth time in six years, with 11. Additionally, he picked up a Gold Glove Award and made the Best Nine as the top pitcher in the league. He became the first 200-million yen pitcher in Carp history. Through 2005, his career line was 78-75, 3.97. Given that he played in the most offense-friendly park in Japan, his ERA+ was probably more impressive than his ERA.

Picked to play for Japan in the 2006 World Baseball Classic, Kuroda was hit by a ball and injured his right index finger, getting replaced on the roster by Tomoyuki Kubota before he could pitch in the tournament. The injury left no lasting impression, though, as Kuroda dazzled through the 2006 season with a 13-6, 1.85 year with 144 K and 21 BB in 189 1/3 IP. He was second in the CL in wins, third in strikeouts, second in ERA and second in complete games. He made his second All-Star squad. He won CL pitcher of the month honors in both July and August (4-0, 1.11), becoming the first Carp hurler to win the award in back-to-back months. He then was sidelined for a spell with inflammation.

A free agent, Kuroda re-signed with Hiroshima instead of taking a look at other teams in Japan or the USA.

In the first 2007 NPB All-Star Game, Kuroda joined with Koji Uehara, Shingo Takatsu, Masanori Hayashi, Atsushi Kizuka, Hitoki Iwase, Tomoyuki Kubota, Marc Kroon and Kyuji Fujikawa to throw a one-hit shutout of the Pacific League. He was 12-8 with a 3.56 ERA in 2007, finishing 9th in the CL in ERA in a significant drop-off from 2006. He led the league with 7 complete games.

After the season, Kuroda declared free agency, seeking a possible trip to the US. He signed with the Los Angeles Dodgers for 3 years and between $36-40 million. He won a spot in the Dodgers' starting rotation in spring training and made his debut on April 4, 2008 against the San Diego Padres. Kuroda had a fine big league debut, scoring as many runs as he allowed (one) and scattering three hits over 7 walkless innings. He retired the first batter he faced, Brian Giles, on a weak grounder, before striking out another Japanese player, Tadahito Iguchi. He retired the first 8 batters altogether before opposing pitcher Justin Germano singled. The only run was a solo shot by Giles in the 6th. Kuroda wound up with the victory while Chad Billingsley threw the final two frames. Kuroda was only 9-10 for the 2008 Dodgers, but had a 3.73 ERA and 119 ERA+, indicating poor luck and run support. He finished in the top 10 in the 2008 NL in complete games, shutouts and fewest walks per 9 innings. After 11 seasons with poor Hiroshima Carp clubs, he made his first postseason start in the NLDS, beating the Chicago Cubs with a strong Game 3 effort to eliminate them from the playoffs.

Kuroda signed a big free agent contract with the New York Yankees before the 2012 season, and has his best major league season wearing pinstripes that year. he made 33 starts, pitched 219 2/3 innings, struck out 167 strikeouts - all of these were personal bests - while putting up a record of 16-11, 3.32. he was the second pillar of the Yankees' starting rotation behind ace CC Sabathia, leading the team to a division title. In the postseason, he gave up 2 runs in 8 1/3 innings in Game 3 of the ALDS against the Baltimore Orioles on October 10th, but was not involved in the decision as the Yankees won, 3-2, in 12 innings. In the 2012 ALCS, he started Game 2 against the Detroit Tigers and again pitched weel, but the three runs he gave up in 7 2/3 innings were enough to saddle him with a loss as the Yankees bats went cold in a 3-0 shutout loss.

Kuroda was one of the few healthy stars in the Yankees camp in 2013, as the team was devastated by injuries, but in his first start of the year against the Boston Red Sox on April 3rd, he was hit on a finger of his pitching hand by a line drive off the bat of Shane Victorino and had to leave the game in the 2nd inning with the Yankees already trailing, 2-0. He was charged with the 7-4 loss. Still, there were no after effects, as over his first 9 starts, he managed to keep his ERA under 2.00, while putting up a record of 6-2. He had only given up 42 hits and 14 walks in 58 2/3 innings, while striking out 39. In his next start against the Orioles on May 22nd, he gave the Yankees another scare when he took a batted ball off his right calf in the 2nd inning and had to leave the game in the 3rd with a bad bruise which developed as a result. However, once again, the injury was not expected to have any longer-term effect. He finished the year 11-13, 3.31 in 32 starts, pitching 201 1/3 innings. He followed that with another solid season in 2014, when he made another 32 starts, with a record of 11-9, 3.71, pitching another 199 innings. Once again, he was the most reliable starter on a staff devastated by injuries.

After the 2014 season, however, he decided to return to Japan, signing a one-year contract with his original team, the Hiroshima Carp, on December 27th. The deal was worth $3.3 million. The decision to finish his career back in Japan ended his major league run with a record of 79-79, and a 3.45 ERA in 7 seasons. Extremely durable, he pitched at least 180 inning in six of the seven seasons.

Kuroda's repertoire features a fastball that peaks at 97 mph, a slider, a splitter, and a hard shuuto (sinker/two-seamer) which makes him an effective ground-ball pitcher. He has been criticized for relying too heavily on his fastball. He is known as a tough competitor.